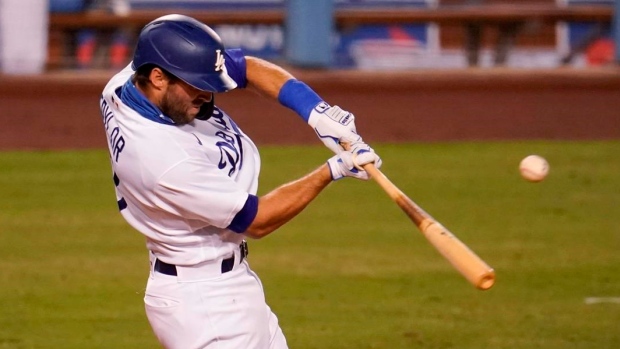 ARLINGTON, Texas — Chris Taylor wasn't in the Los Angeles Dodgers starting lineup for Game 6 of the National League Championship Series against the Atlanta Braves on Saturday, a day after injuring his right ankle.

Manager Dave Roberts said Taylor was moving around and feeling better than expected. Roberts indicated the versatile player could be available to play if needed with the Dodgers facing potential elimination again.

Kiké Hernández started at second base for the Dodgers against Braves left-hander Max Fried. AJ Pollock was in left field.

Atlanta, trying to get to its first World Series since 1999, had its same lineup as Game 5 to face Dodgers right-hander Walker Buehler.

Taylor injured his right ankle on a throw from the left field line in the eighth inning of Friday night. Taylor finished the game.

It was only the second time this post-season that Taylor didn't start for the Dodgers. He has started seven times at second base, and Game 5 of the NLCS was the fifth time in those games that he had a midgame switch to left. His other two starts in these playoffs came in left field.