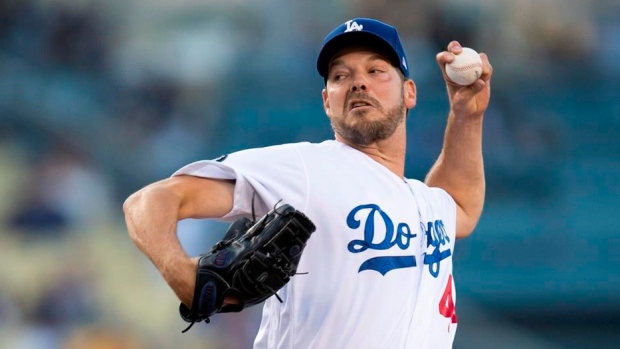 The NL West-leading Dodgers rebounded from an early deficit for the second straight game, getting two-out homers from Matt Beaty — a two-run shot that was the first of his career — and Justin Turner that tied it up.

Hill (4-1) allowed three runs and seven hits. The left-hander struck out seven and walked none against the team that drafted him out of Michigan in 2002.

Kenley Jansen worked the ninth for his 20th save. Jason Heyward was safe at second after the ball went through the legs of Beaty at first for an error. He took third on Jansen's balk before Victor Caratini struck out to end the game.

With two outs and the game tied, Hill singled into shallow left field to score Beaty, who had doubled, and gave the Dodgers a 4-3 lead. That ended a streak of the Dodgers scoring 13 straight runs on homers.

They added a run in the fifth when Max Muncy grounded into a fielder's choice to first off Kyle Ryan and Alex Verdugo scored to make it 5-3.

Beaty homered in the second and Turner added a solo shot for his 100th career homer in the third that tied it 3-all.

The Cubs led 2-0 in the first on Anthony Rizzo's 18th homer down the right field line. Cody Bellinger leaped for it and the ball hit a fan in the chest and bounced back on the field. It was initially ruled a double, but was changed to a homer after a review.

Kris Bryant's 15th homer gave Chicago its last lead at 3-2 in the third.

Kyle Hendricks (7-5) gave up five runs and six hits in 4 1/3 innings — his shortest outing since lasting four innings at Milwaukee in his second start of the season. The right-hander struck out one and walked two.

The Cubs fell to 7-6 against left-handed starters and have dropped nine of 11 road games.

The Dodgers loaded the bases on three consecutive walks by Mike Montgomery in the seventh. Albert Almora Jr. robbed Chris Taylor of a grand slam with a sensational catch against the centre field wall that caused him to fall on his back.

Muncy had some fun with his comment to Giants pitcher Madison Bumgarner after the second baseman homered into San Francisco Bay last week.

Muncy wore a T-shirt reading "Go get it out of the ocean" during batting practice Friday. That was his response when Bumgarner told him "Don't watch the ball, run."

Alex Verdugo recorded three consecutive outs in the Cubs' half of the sixth. The centre fielder charged a liner by Javier Bàez and made a diving catch for the first out. Willson Contreras and Almora Jr. followed with fly balls that Verdugo caught, providing Hill with a quick inning.

Cubs: RHP Yu Darvish (2-3, 4.98 ERA) pitches at Dodger Stadium for the first time since a disastrous outing in a Game 7 loss in the 2017 World Series when he was with Los Angeles.