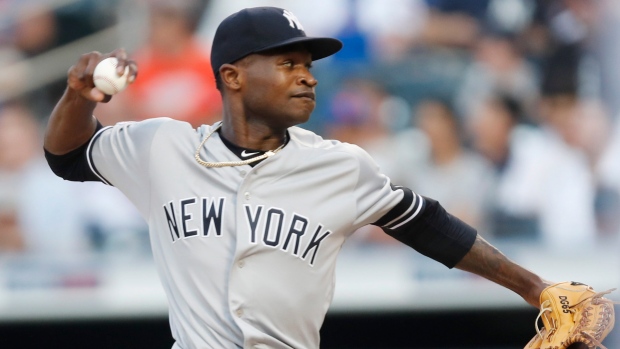 NEW YORK — Domingo Germán felt solid coming off the injured list. He was happy to get a little support nonetheless.

Germán (10-2) allowed a run over six innings, giving up five hits and no walks. The 26-year-old right-hander struck out six and threw 80 pitches in a tidy return from a strained left hip flexor, which had sidelined him since June 8.

"I think I felt very strong out there," Germán said through a translator.

He got an appreciated lift from his defence, and Urshela in particular. The third baseman made three stellar defensive plays.

"Magnificent," Germán said. "In my humble opinion, I think he's a candidate to win the Gold Glove."

The Mets haven't won the season series since 2013. Jason Vargas (3-4) settled after a rocky first inning, pitching three-run ball into the sixth. The left-hander struck out six and allowed seven hits and two walks.

Jeff McNeil homered on Germán's first pitch, but the Mets failed to rally following consecutive comeback victories against the Braves and Yankees. The Mets have lost eight of 10.

DJ LeMahieu and Aaron Judge hit consecutive doubles leading off the first, and Torres scored Judge with a single for a 2-0 lead.

McNeil countered with his shot in the bottom of the inning, the All-Star's seventh long ball this season.

Vargas slowed things down with a steady dose of changeups and kept the Yankees in check until Gregorius' solo homer in the sixth. Wilmer Font relieved Vargas and allowed Urshela's shot, which made it 4-1 Yankees.

"He kept them off balance, kept the ball underneath the zone when he needed to, and he gave us a chance," Mets manager Mickey Callaway said. "Another great outing by him."

Vargas said he lost his concentration on Gregorius' shot.

"I just made a mistake," the veteran said. "I just really lost focus, a complete lack of focus."

Mets left-hander Steven Matz made his first relief appearance since being moved to the bullpen until after the All-Star break. He faced one batter, retiring Gregorius leading off the seventh on four pitches.

Urshela twice backhanded grounders and threw on the run from foul territory to get outs at first base early in the game, then dived into the hole and threw from a seated position to nab McNeil on a hard grounder in the eighth. The last stop came after Urshela's left glute tightened up as he rounded the bases on his homer, which had manager Aaron Boone ready to pull him from the game. Urshela was stretched out by trainers and told Boone he could stay in.

"We've seen him make some really, really special plays that not a lot of guys do, frankly," Boone said.

Germán was up to 96.6 mph with his fastball and threw 56 strikes.

"Stuff, tempo, command, everything," Boone said. "That was the good, dominant version of Germán."

Yankees: Boone said RHP Dellin Betances is "90%" recovered from the lat strain that has kept him out all season. Betances is still about a week away from resuming throwing. ... TV play-by-play announcer Michael Kay saw a specialist in Boston on Wednesday and will have surgery to correct an issue with his vocal cord. He expects to miss about a month.

Mets: OF J.D. Davis stayed at home with a stomach virus. ... INF Jed Lowrie is "not close" to beginning a minor league rehab assignment, Callaway said. Lowrie signed a $20 million, two-year deal in the off-season but hasn't played yet this year. Asked what Lowrie's injury is, Callaway declined to provide specifics, saying only it was a left side issue. Callaway said Lowrie has been participating in baseball activities at the team's facility in Port St. Lucie, Florida.