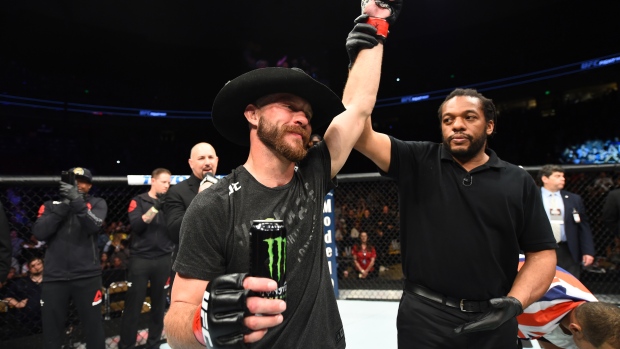 While Conor McGregor will dominate the headlines heading into Saturday’s UFC 246 main event, Donald “Cowboy” Cerrone might have the bigger say in the type of fight that takes place inside the Octagon.

While McGregor is known primarily for his lethal left hand, Cerrone has the skill set to take this fight to the ground and look for a finish on the mat.  The question is, will he?

“I’m saying, I’m going to go out and stand with him,” Cerrone told TSN’s Aaron Bronsteter.  “Maybe Conor will shoot at me, I’ve seen him do a bunch of wrestling.  Maybe he can take Ol’ Cowboy down.”

One trap that Cowboy does not intend to fall into, that many before him have been ensnared by, is the war of words, a place where McGregor is rarely tested and never defeated.  Cerrone is aware of that danger.

“Mental warfare, he gets in the minds of these guys and kills them, not to mention he’s an outstanding athlete; he’s got a great southpaw stance and devastating hands,” said Cerrone.

Despite being the UFC’s winningest fighter, Cerrone has sometimes had a reputation for not being able to win the big one.  Whether that’s his lightweight title fight loss to Rafael dos Anjos in December of 2015 or the back-to-back losses to Tony Ferguson and Justin Gaethje that make up the losing streak he currently carries into this bout.

The 36-year-old does not believe that anything deeper should be read into those or any other losses he’s suffered throughout his career.

“Just couldn’t find second gear on that night, just grinding,” said Cerrone.  “Whoever it was, for whatever reason, I just couldn’t figure it out.  Who knows?”

With all of the people angling to fight McGregor in his return to the Octagon, Cowboy was not willing to get emotionally invested in the fight until everything was finalized and official.

“When Conor announced it, my phone went crazy and I said ‘I’m going snowmobiling’,” said Cerrone.  “Then my phone kept ringing, they were trying to get it done and we were up in the mountains.  Finally it worked out and we made it happen, but it was the boy who cried wolf, I didn’t believe it.”

As for the fight preparations, as always Cowboy is going to let his team to the work, relying on them to set the game plan and not watching video on McGregor.