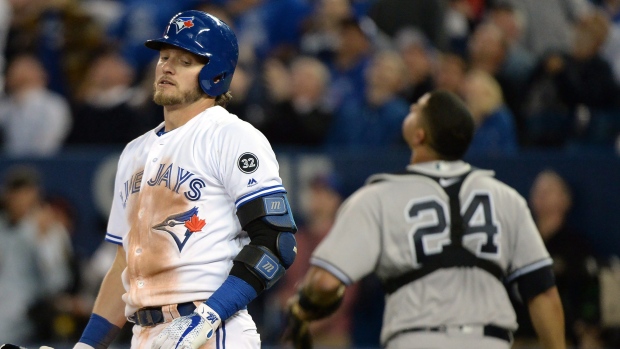 Toronto Blue Jays third baseman Josh Donaldson appears to making progress from his nagging calf injury as the three-time All-Star is likely to start a rehab assignment in Dunedin on Monday, according to TSN's Steve Phillips.

"Not sure this means anything, but Josh Donaldson’s locker in the clubhouse was cleared out sometime over the last 24 hours. Just an empty stall with a nameplate now," Mitchell reported in a Tweet Saturday evening following Toronto's victory over the Philadelphia Phillies.

My sources indicate that Josh Donaldson is likely to start a rehab assignment in Dunedin on Monday which explains the empty locker in Toronto. GM Ross Atkins has said previously he didn’t expect Donaldson to need a lengthy rehab assignment. #BlueJays https://t.co/LlDT8wcLxc

The 32-year-old hasn't played since late May due to the injury, resulting in Toronto being unable to move the 2015 MVP ahead of the non-waiver trade deadline on July 31.

The Jays can still deal Donaldson before the August 31st waiver trade deadline, but nothing appears to be imminent at this moment.

Donaldson has appeared in only 36 games in 2018, hitting .234 with five home runs and 16 RBIs. This is his fourth season in Toronto and he will be a free agent this winter.