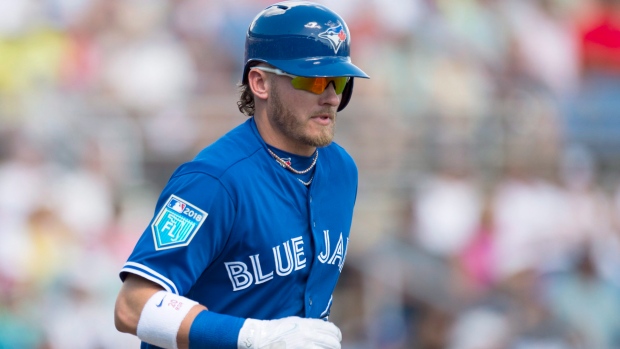 “He’ll be back out there in the next couple days. He looked good,” Gibbons told reporters on Saturday before his team's clash against the New York Yankees from Rogers Centre.

John Gibbons on Josh Donaldson throwing before Saturday’s game: “He’ll be back out there (at third base) in the next couple days. He looked good.”#BlueJays

Donaldson will serve as the team's designated hitter for a second straight game after struggling to make the throw to first base on Opening Day on Thursday.

Gibbons says everything is "structurally" fine with the arm, but will serve as DH in order to get it back to where it needs to be.

Donaldson told reporters that he feels his throwing arm is headed in the right direction after taking grounders earlier Saturday.

Josh Donaldson says he’s moving in the right direction and feels better after taking grounders. He says Gibbons has been monitoring him and he’ll let the manager decide when he’s ready to return to third base. #BlueJays

Donaldson will be a free-agent at season's end.

In other news, second baseman Devon Travis, who has dealt with numerous injuries over his short career, will get the day off on Saturday. Gibbons says the 27-year-old will be on a schedule where he plays two games before getting one off.

Devon Travis’ schedule early in the season will be two games on and then one game off. He gets a day off Saturday. Gibbons said he’d take 110 games out of Travis this year. #BlueJays