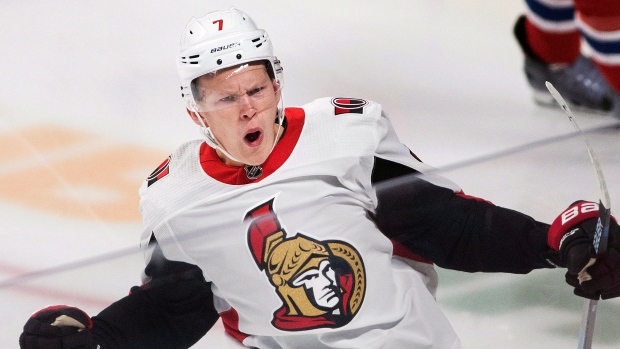 Ottawa Senators general manager Pierre Dorion is feeling confident about the organization’s player development program as the franchise continues to progress through a rebuild.

“Obviously it’s well-known in Ottawa that we’re going through a rebuild,” Dorion told TSN Radio 1200 Ottawa in the first intermission of Wednesday’s AHL Belleville Senators loss. “I’d say we’re maybe slightly ahead of where we intended to be so that’s good. But at the same time, we want the players down here to progress. We’ve had a lot of injuries, but definitely with what we’ve had the chance to see so far this year, we’re also really happy with the direction this team is going in.”

A myriad of injuries in Ottawa this season has resulted in multiple players being prematurely called up from Belleville, but Dorion remains optimistic in the organization’s ability to scout and develop young prospects in order to create enough depth.

“I think that says a lot about our amateur scouts with the players they’ve brought in here, and our pro scouts with some of the free agents we’ve signed, and the depth guys who have been able to play here with all of the injuries,” Dorion said. “The coaching staff here has done a tremendous job and, at the same time, you have to credit the players here because it’s on them.”

Some of the younger players have managed to make enough of an impression with the NHL club to secure a roster spot until further notice – a group that includes Brady Tkachuk, Max Lajoie and Christian Jaros.

“We told Christian Jaros to get his own place. That doesn’t mean they’re not gonna come back [to Belleville] but we told Christian he would be up for the year,” Dorion said. “We also did the same with Max a while ago and we told Brady that he could also get a place. Most of the time, unless their play really goes downhill, they’ll be with us for the rest of the year.”

Belleville and Ottawa aren’t the only teams fostering the growth of the organization’s prospects. Dorion is pleased with many other players further down the pipeline as the Senators could be well-represented at the World Juniors later this month with Josh Norris (USA), Jacob Bernard-Docker (CAN), and Alex Formenton (CAN) all on preliminary rosters. Formenton, however, appeared to suffer a knee injury in an exhibition game on Wednesday, putting his status for the tournament in doubt.

Bernard-Docker was Ottawa’s first-round selection (26th overall) this past June and Dorion was very encouraged by what he saw from the 18-year-old defenceman during an NCAA game earlier this year.

“He’s someone that I had the chance to see this year. He really impressed us. He already looks physically mature, moves the puck, shoots it a ton, and is a big guy who skates well. He’s the new-age defenceman and we hope he makes [Team Canada] so he can build on that.”

“One guy that’s fairly intriguing is Markus Nurmi. He’s having a good year for TPS (SM-liiga) and we hope to sign him at some point in time near the end of the year,” Dorion said. “Another one that you should maybe be talking about is Joey Daccord. I’d say he’s one of the better goaltenders in the NCAA. So those are two guys who are later-round picks and people don’t pay as much attention to them but we hope to sign and have them both next year – whether it’s in Ottawa or Belleville.”