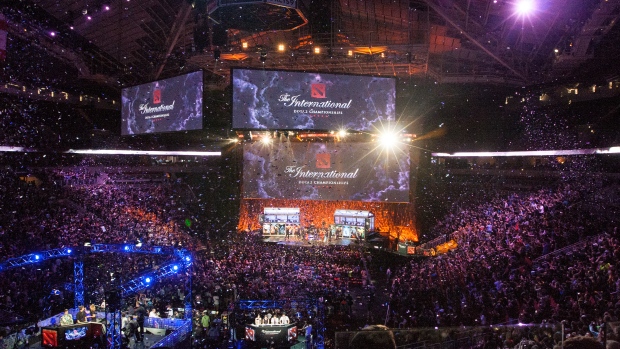 Dota 2 is a Multiplayer Online Battle Arena (MOBA) game in which two teams of five players battle to infiltrate each other's base and destroy a central structure called the Throne.

The game is played in an arena separated by two sides called Radiant and Dire. The map is comprised of three lanes (Top, Middle, Bottom) with rivers and forests filling up the rest of the field of play. Due to the design of the rivers, each side possesses a longer "safe lane" and a shorter "suicide lane."

Team bases are protected by three towers in each lane that will attack all enemies that cross into their territory as well as additional towers protecting the Throne. There are also two Barracks in each base that send out computer-controlled creatures called creeps that travel through the lanes and attack opposition towers.

Teams are made up of five Heroes, each controlled by a human player, who possess individual statistics and abilities that develop throughout the course of the game.

Heroes upgrade their abilities by gaining levels (1-25) and purchasing items. Heroes gain experience to level up and gold to acquire new items by defeating enemies.

There is also an array of monsters (also called creeps) located throughout the jungles that provide champions with temporary boosts should they defeat them.

Heroes are divided up into categories based on their strongest primary attribute.

There are three primary attributes - Strength, Agility and Intelligence - and four other attributes - Damage, Armor, Movement Speed and Magic Resistance - that can be upgraded throughout the game by leveling up and purchasing items.

Strength: These Heroes are the bruisers of the game. They start with the most health, can regenerate health faster than others and can handle the most damage. They are almost always melee (close range) champions.

Agility: The more technical Heroes, these cast of characters are fast and have plenty of armour. They get the most out of their regular attacks and purchased items but can burn you with their abilities as well.

Intelligence: They are easier to kill than the other Heroes, but that doesn't make them weak. They rely on spells and abilities to leave their mark and have more mana and better mana regeneration than the other groups of Heroes.

Champions are best suited to perform different tasks throughout a game based on their attributes. These specific roles are part of the overall team composition and the right combination and execution is often the difference between victory and defeat.

Carry: The name comes from the idea that the team is supposed to "carry" this Hero until they can become strong enough to finish the job. They can grow to be extremely powerful late in the game and are often expected to lead the way to victory.

Support: Tasked with protecting the carry through the early stages of the game, these champions often have abilities that replenish teammates health and mana while deterring the enemy at all costs with disabling attacks.

Jungler: You guessed it - these Heroes roam the jungle fighting creeps. Junglers free up lanes provide a major advantage for their team in both gold and experience.

• DOTA 2, developed and published by Valve, is the sequel to the original DotA (Defence Against the Ancients) and was released in 2013.

• The world championships, called The International, was initially created by Valve as a tactic to have players showcase the new game. Since then, the prize pool has grown to $18.4 million, which ranks ahead of The Masters and the Super Bowl.

• The current world champion and winner of the The International 2015 is American-based team Evil Geniuses, who took home more than $6 million for their efforts.