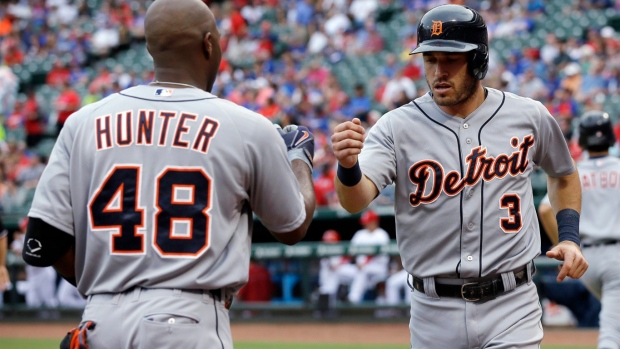 Double dose of Martinez for Tigers in their 6th win in row, 8-6 over slumping Rangers Article Image 0 , The Canadian Press

ARLINGTON, Texas - Those Martinez sluggers in the middle of the Detroit Tigers' lineup keep coming up big.

Most everyone already knew about Victor. Now they are getting familiar with J.D.

The unrelated players homered on consecutive pitches by different Texas pitchers in the fifth, after back-to-back doubles in a three-run first, as the AL Central-leading Tigers stretched their winning streak to six games with an 8-6 victory at Texas.

"He's been swinging the bat great, and he's a guy that has a lot of power," cleanup hitter Victor said of J.D. "He's getting a chance to play more often, and he's been doing a lot of damage."

After Victor Martinez led off the fifth with his 20th homer to chase Joe Saunders (0-4), J.D. went deep on the first pitch thrown by reliever Shawn Tolleson.

It was his ninth homer this season, the sixth during a 14-game hitting streak that is the longest active in the majors. J.D. Martinez is hitting .418 (23 for 55) with eight doubles and 17 RBIs in that span.

"Vic's been swinging the bat well all year, right-handed, left-handed, you take your pick," manager Brad Ausmus said. "The thing about J.D. is his power. When he gets hot, the ball is going to travel."

Victor and J.D. also had consecutive doubles when Detroit went ahead to stay with three runs in the first inning.

"It's definitely hard to comprehend a seven-game losing streak, but it is what it is," Rangers manager Ron Washington said. "We knew why. We've got to score some runs, and we've got to pitch better."

The Rangers trailed 6-3 when left-hander Saunders left after giving up seven hits and walking five.

Anibal Sanchez (5-2) struck out five and allowed four runs in 5 1-3 innings. The right-hander is 5-0 in his eight starts since coming off the disabled list May 18 after missing three weeks with a cut on his right middle finger.

Joe Nathan, the Texas closer the last two seasons before leaving in free agency, gave up a run in the ninth before clinching his 16th save in 21 chances.

Carlos Pena homered and scored twice in his second game back with the Rangers, the team he made his major league debut for in 2001 before being traded the following winter.

Detroit's first five hits were for extra bases before Torii Hunter's RBI single in the third made it 5-0.

Rajai Davis led off the game with a triple into the right-centre gap. Ian Kinsler then walked on four pitches and Miguel Cabrera had a sacrifice fly before the consecutive Martinez doubles.

Kinsler and Cabrera had consecutive doubles to start the third.

Texas scored three times in the fourth, which started when Shin-Soo Choo singled before Adrian Beltre's RBI double. Pena singled and came home on a single by Robinson Chirinos.

Texas rookie second baseman Rougned Odor struck out for the third time in the eighth, but made it to the third base after a wild pitch and a throwing error by catcher Bryan Holaday. Odor was initially called out sliding into third base by umpire Tim Welke even as the ball rolled free, but the umpiring crew conferred and changed the call to safe without a replay.

NOTES: The Rangers are a season-high 12 1-2 games behind Oakland in the AL West, their largest deficit since the end of the 2008 season. ... The Rangers are 16-21 at home, where they have lost six of their last seven. ... When Pena homered in the sixth, the ball landed in a pan of brisket set up in a seating area in the right-field corner.