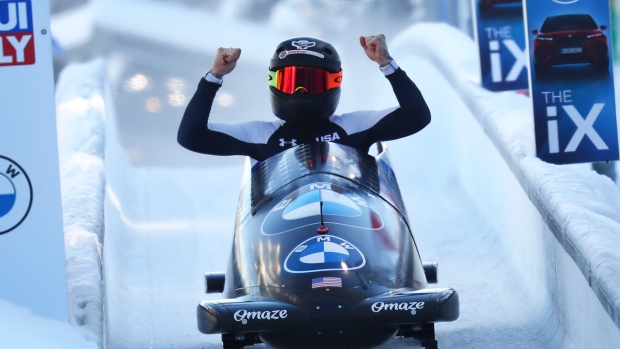 Kaillie Humphries wasn’t sure if she would get a chance to race this season.

She ended up on top of the world — twice.

Humphries ended her international season Sunday by winning the inaugural women’s monobob world championship in Altenberg, Germany, adding that gold medal to the one she and Lolo Jones claimed on the same track last weekend.

“To be able to end on a high, I really just continue to think that I am so grateful to be here,” Humphries said. “To be representing the United States and to be able to compete is such a huge honour. And I’m excited to go home and see my husband and my dog.”

Moments later, Humphries hopped atop the medal stand amid a backdrop of snow-covered evergreen trees, wrapped herself in the American flag, then put her right hand over her heart as “The Star-Spangled Banner” cut through the frosty air.

It was her fifth world championship, her third in as many tries since getting her release from the Canadian program and beginning to slide for the United States in 2019. If the Calgary native — a two-time Olympic gold medallist who is married to an American and now calls San Diego home — is going to race for the U.S. in next winter’s Beijing Games, she needs to obtain citizenship in the coming months.

Toronto's Cynthia Appiah was the top Canadian in fifth place.

"I crashed four out of six times in training and was on the cusp of not competing," Appiah said. "I was feeling down in the dumps and just wanted to throw in the towel, but Day 1 (of the race) went surprisingly well and it gave me a little more confidence."

Humphries’ final time for four runs over two days was 3 minutes, 59.62 seconds — a half-second better than anyone else. She had the fastest time in each of the final three heats, a track-record time of 59.47 seconds in the final run clinching gold.

“We just saved the best for last," Humphries said.

Germany and Canada took the next six spots behind Humphries, with the Germans grabbing silver and bronze. Stephanie Schneider, the leader after Saturday’s first two heats, finished second in 4:00.12. Laura Nolte was third in 4:00.42.

On average, those six German and Canadian sleds were 1.43 seconds behind Humphries. In sliding, that margin is enormous.

“Kaillie, she’s the best in the world, hands-down, one of the best pilots in the world, men or women, taking the bobsled down the hill,” U.S. assistant coach Brian Shimer said. “No question.”

Elana Meyers Taylor was 15th for the U.S., her medal hopes dashed by a first-heat crash Saturday.

Like Humphries, Germany's Francesco Friedrich won double gold at worlds, capping off an easy four-man win later Sunday in 3:35.02. It's the fifth consecutive year that he has swept the two- and four-man golds at either the world championships or Olympics, and his 11th world championship overall.

The Austrian sled driven by Benjamin Maier was second in 3:35.81, and the German sled driven by Johannes Lochner was third in 3:36.53. Justin Kripps of Summerland, B.C., drove the Canadian sled to a fifth-place finish in 3:36.95.

"We put up a good fight, but I just made too many mistakes in the track," said Kripps. "This is still one of my best results in four-man here, and I learned a lot about how to drive four-man in Altenberg when the track is fast like this."

Counting all three sliding sports — bobsled, skeleton and luge — American athletes won 18 medals on the top international sliding circuits this winter, all from women. Each of Humphries’ five medals were golds; two from worlds, one in World Cup and two in the Monobob World Series.

The U.S. wasn’t sure until December if it would be going overseas to compete in any events. These world championship races for bobsled and skeleton were to have been held in Lake Placid, New York, over the past two weeks — then moved to Germany because of the pandemic and travel concerns.

The American teams wound up skipping the first half of the season while determining if their sliders could compete in Europe safely. They figured it out in time, and once Humphries got rolling over the past three weeks including the World Cup finale and last weekend’s women’s bobsled title race, she was unstoppable.

“A historic day,” Humphries said. “I am super pumped.”

With files from The Canadian Press. More AP sports: https://apnews.com/hub/apf-sports and https://twitter.com/AP_Sports