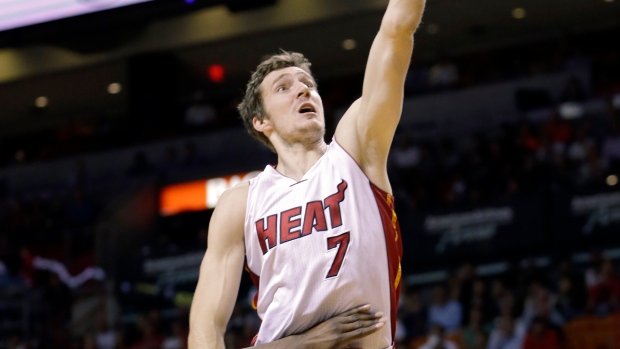 Goran Dragic was still asleep when roused by his ringing cellphone at 6:01 a.m. on July 1, exhausted from spending the previous day at a water park with his son in their native Slovenia.

An hour later, the Miami Heat point guard was back in bed.

Dragic went into free agency hoping to stay with the Heat, and it didn't take long for the sides to get that arranged. The Heat called him at the first possible moment of the free-agent shopping period, and one conversation was all it took to agree on an $86 million, five-year deal that was signed Thursday — the first possible day that could be done.

"My wife and my family, we really feel comfortable here in Miami," said Dragic, whose brother Zoran Dragic also plays for the Heat. "And of course, this organization wants to win a lot of championships. It was my first goal in continuing my career to be somewhere that we can win. That was an easy decision for me because it's a great organization and a great team."

Heat President Pat Riley believes if the roster stays healthy, Miami can get right back in the race for the Eastern Conference.

"With a complete roster, then we can contend in the East," Riley said. "That's where it all starts. ... We're going to go for it."

Dragic said he got "a good deal," though it certainly wasn't the biggest that he could have commanded. Dragic could have asked for about $20 million more over the life of the deal from the Heat but decided that ensuring the team could have the ability to build a championship-contending club was more important than getting every last dollar.

"I'm 29 years old," said Dragic, who is returning to Slovenia on Friday to prepare for the arrival of a new baby around Aug. 25. "Now is the time to win something."

Dragic will be the quarterback for a team that missed the playoffs.

He never played with Chris Bosh after getting traded to Miami last season, since the perennial All-Star forward was sidelined by blood clots. Dwyane Wade — who has agreed to a $20 million, one-year deal — and Luol Deng were in and out of the lineup because of injuries, Josh McRoberts' season was long over because of knee surgery and the starting lineup was changing constantly.

Bosh is on track to return as scheduled for training camp, McRoberts should be recovered from surgery and the Heat are expected to meet with free agent big man Amare Stoudemire on Friday as well.

"You have to have high expectations," Riley said. "I've always had them. I think we have always had them ... even when we may have a down year. But we don't feel like we're in that cycle right now. We have moved on from what happened last year. It was an injury-plagued year. We never made excuses about that. That was a reality."

It wasn't what anyone in Miami wanted, but optimism is running high now anyway — in large part because Dragic and Wade stayed.

"It's going to be an unbelievable team," Dragic said. "A lot of opponents are going to be scared of us."

Keeping Dragic was a major priority for the Heat this summer, especially since they included two future first-round picks in the deal that brought the point guard to Miami from Phoenix. He averaged 16.6 points in 26 games with the Heat.

"This is the right place," Dragic said.

In other Heat moves Thursday, the first full day of the new NBA year:

— Shooting guard Gerald Green signed his $1.4 million, one-year deal to join the Heat, who will be his eighth NBA team. Green and Dragic were teammates in Phoenix. Green has made 341 shots from 3-point range over the last two seasons, the ninth-most in the NBA during that span, and his ability from long range was something that particularly appealed to the Heat. "He is a dynamic talent ... a perfect complement to our team," Riley said.

— The team announced that shooting guard Tyler Johnson broke his jaw in a summer league game Wednesday. His agent, Pedro Power, said that Johnson was having surgery Thursday. Johnson has a nonguaranteed $845,000 contract for next season, though half of it becomes guaranteed Aug. 1.