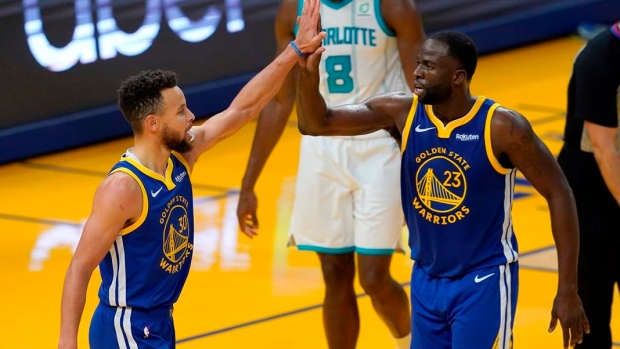 SAN FRANCISCO — Do-everything Draymond Green vowed to make up for losing his cool and costing Golden State a win at Charlotte last weekend.

He delivered with a triple-double of a career-high 19 assists, 12 rebounds and 11 points to help the Warriors to their first three-game winning streak of the season with a 130-121 victory against the Hornets on Friday night.

“Revenge game would be a bit of a stretch,” Green said. “Just me coming out and making it right. Trying to do whatever I can to help this team get a win. Can't just forget about what happened last week."

Stephen Curry added 29 points and eight assists after he sat out with an illness Saturday night in his hometown of Charlotte.

“With Curry back, it changes our defence,” Hornets coach James Borrego said.

Green notched his franchise-leading 25th career triple-double and first this season — dishing on each of Kelly Oubre's six first-quarter dunks as he finished with 27 points on a night seven Warriors reached double figures. Green credited Oubre's timely cuts helping the cause.

“Just trying to exploit the lack of focus in certain areas," Oubre said of Charlotte's defence.

Green, especially, wanted a big game after he was hit with two technical fouls and ejected with 9.3 seconds left last Saturday for arguing the outcome of a jump ball. Terry Rozier made an off-balance jumper from the left corner as time expired for a 102-100 win by the Hornets.

“Kind of a sour ending,” is how Andrew Wiggins described it earlier Friday.

Added Oubre: “We owed them.”

The Warriors matched a franchise record with 16 assists on their 17 first-quarter baskets — Green dishing out eight of those to tie the most he’s had in a single quarter — while shooting 77.3%. They led 66-51 at halftime.

“It started right at the beginning of the game. He was just picking the defence apart,” coach Steve Kerr said of Green. “He’s on top of his game right now. I just think he’s been playing better and better over the last couple weeks.”

Wiggins scored 17 for the Warriors in a quick visit home from a 2-2 East Coast road trip before another four-game trip all against the Western Conference. Golden State snapped a three-game skid to Charlotte, led by Rozier's 24 points.

Rookie James Wiseman and fellow big man Kevon Looney boosted the rotation after they were both still sidelined from injuries before returning Tuesday against the Knicks.

The Warriors have won three straight after having consecutive victories seven different times previously without winning a third in a row.

“I kind of like the fact that nobody in the locker room was really that happy with the way we played. We had some good moments and some good individual performances but it was a wild game, an awkward game,” Kerr said. “The locker room’s quiet, that’s a good sign. We’ve won three in a row and nobody’s that happy. We know we can play better and it’s a sign that we think there’s more to come.”

A hard foul by Green on PJ Washington at the 9:43 mark of the opening quarter went to review and was ruled a Flagrant 1 foul.

Green had his fourth game in February with 15 or more assists. His assists were the most by a Warrior since Baron Davis had 19 against Memphis on Jan. 11, 2008.

With his first points of the night on a layin with 8:04 left in the opening quarter, Curry became the fourth player in franchise history with 6,000 career made field goals.

Warriors: Golden State matched its longest home winning streak at three straight, also done from Jan. 25-30. ... The Warriors had 38 assists in all and shot 11 of 24 from 3-point range.

Hornets: At Sacramento on Sunday night to continue a five-game road trip. It's the first matchup between the opponents this season and Charlotte has won three straight over the Kings.

Warriors: At the Lakers on Saturday having snapped a three-game losing streak in the series with a 115-113 win at Staples Center on Jan. 18.