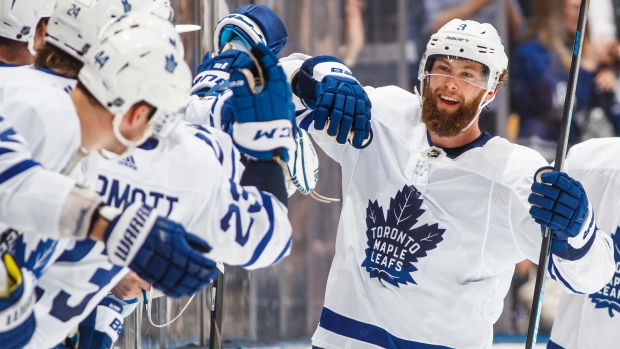 "I believe there's an agreement in place for Jake Muzzin to extend with the Toronto Maple Leafs [at] four years just over $5.5 million [per year]," Dreger said Thursday on Insider Trading. "I believe it's a heavily front-loaded contract extension for Jake Muzzin. It will have some variety of forms of trade protection. Now, because of the tagging issues – the salary cap complications the Toronto Maple Leafs continue to wrestle with, I don't believe that the Maple Leafs will announce are going to announce anything until perhaps later this month or early in March."

Muzzin is currently scheduled to become a free agent in July and carries a $4 million cap hit this season, the last of a five-year deal signed with Los Angeles in 2014. The extension would make Muzzin the Maple Leafs' highest-paid defenceman next season, coming in ahead of Morgan Rielly, who carries a $5 million cap hit through 2021-22.

The 30-year-old has four goals and 18 points 50 games with the Maple Leafs this season while averaging 21:40 of ice time per game.

The Maple Leafs acquired Muzzin, a Stanley Cup winner in 2014, from the Los Angeles Kings for Carl Grundstrom, Sean Durzi and a 2019 first-round pick on Jan. 28, 2019.