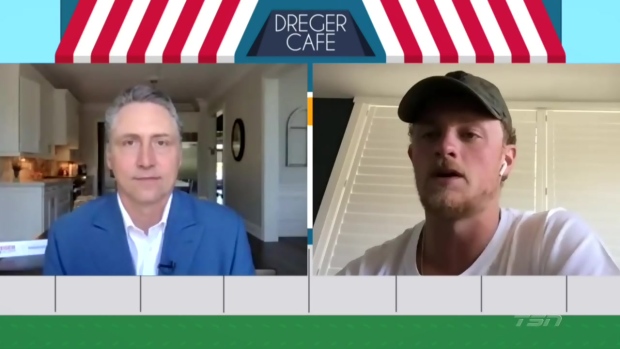 TSN Hockey Insider Darren Dreger has relocated the Dreger Cafe brought to you by Old Spice from the World Hockey Championship to his home to bring you the latest from some of the game's prominent personalities.

On the comments he made in late-May about being fed up with losing:

Eichel: I think you have to be honest with yourself, you have to be honest with your peers and really that’s what I was trying to do. Like I said in the call, it’s been a tough five years. It seems like every year it’s the same story at the end of the season. I’m a competitor, I want to win every time I go on the ice, I want to win every season, you know, and I think a lot of guys in our room are like that. It’s just we haven’t figured out a way to do that. Of course I think any competitor or any guy that wants to win is going to be frustrated with the situation and fed up with the losing.

On how his comments were received within the organization:

Eichel: I think if they don’t hear that from guys, then that’s when you start to worry if guys are okay with the fact that we’re not winning, that we’re not putting ourselves in the postseason season after season. That’s where you have to find an issue. I spoke with both [head coach Ralph Kruger] and [general manager Jason Botterill] about it and they understand the frustration and they’re frustrated, too. I think I’m not the only guy that’s doing it. Obviously I might have voiced my opinion a little bit more bluntly but that’s just how it is.

On what has to change to put the Sabres in the playoffs next season:

Eichel: We’ve just got to win more hockey games is what it comes down to. As simple as that is, it’s – you know you’re not going to play well every night and you know you’re not going to be at your best. You watch throughout an NHL season the best teams find ways to win games when maybe they’re not at their best. You know, for us we play good hockey, we’ll play a good game, we’ll play a good stretch of games and then it seems like the wheels fall off for a little bit and then we have to try and put them back on. That really just can’t happen. It’s got to be a competitive night in night out thing and we do have a young group, for sure, and guys are learning and they want to learn but, you know, just as a team, as a full unit, we’ve just got to start figuring out a way to take the next step and honestly just be better.