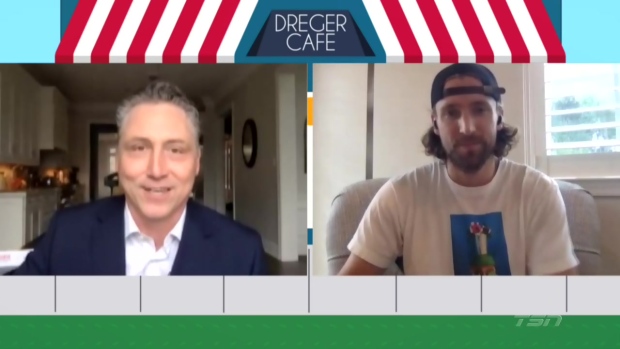 TSN Hockey Insider Darren Dreger has relocated the Dreger Cafe, brought to you by Old Spice, from the World Hockey Championship to his home to bring you the latest from some of the game's prominent personalities.

Darren Dreger: Blake, a young family with three kids. Aside from working out, I’m going to assume that it’s not very difficult for you to stay busy?

Blake Wheeler: We’re definitely busy. It’s just a matter of juggling our oldest son, Loui, he’s in first grade, he’s got a lot of schoolwork to stay on top of. So, keeping him engaged while also our daughter is four and our youngest is turning three here pretty quick. It’s funny when you’re playing, you wish for situations like this. You lay in bed on the road and you’re like ‘what I would do to just have a week off and hang out with my family.’ Well, we’re almost 10 weeks in. Be careful what you wish for. There’s hiccups here and there, but I think Sam and I are making the best of it and it’s been great to spend a lot of quality time with them.

Dreger: Your good friend and teammate Mark Scheifele is on the Return to Play Committee. Are you in constant communication with him? Are you grilling him on the latest or do you just wait for the texts and emails to come in to keep you up to date?

Wheeler: I give him a hard time because you know I’ll be like ‘Scheif, I’m getting all my information from Pierre LeBrun and Darren Dreger. What is going on man? Keep me up to date here.’ So, he’s doing a great job. I think the hardest thing and the thing that he’s been in constant communication with us about is just trying to come up with a scenario that is reasonable for everyone. I tell you what, they’re exhausting every angle to try and make it right and make it as fair as possible and try to keep the integrity of our playoff system intact.

Dreger: If all can agree on a 24-team format, well then to get to that point where it’s equal footing, how do you do it?

Wheeler: With the parity in our league, there’s so many teams in the mix right now which is obviously a great problem to have. I think what you need to be really conscientious of in this situation is that there are some teams that have had incredible regular seasons and you don’t want to handicap them as well. I think the hard thing would be to have the bubble teams play a play-in and all of a sudden now Boston or St. Louis or Colorado, who have been at the top of the standings all year, they’re sitting there cold and have to play a team that’s already played a 3-5 game series and they’re coming in hot. Those are all some of the big issues. I think there’s probably a way that once they shake out whatever the numbers are going to be, try to make it so all the teams are playing before you know, when I say the games matter, I’m talking about do-or-die situations, so that the players in somewhat decent shape and so the competitive balance is intact.