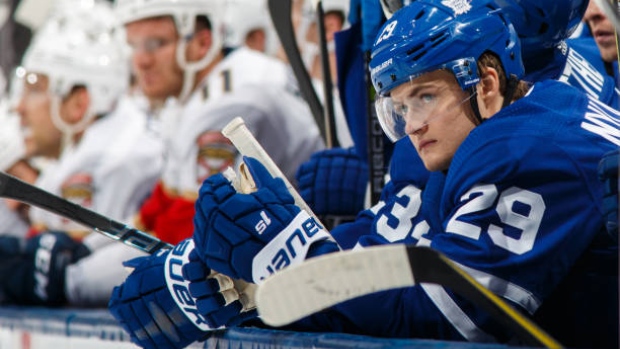 The Toronto Maple Leafs were dealt a blow Monday when it was announced centre Auston Matthews will miss four weeks with a shoulder injury, and it doesn't appear the return of William Nylander to provide relief is imminent for the club.

Speaking Monday on TSN Radio 1050 Toronto, TSN Hockey Insider Darren Dreger said that, as of the weekend, "a pretty wide gap" still existed in both term and money between the Leafs and the restricted free agent.

The two sides appeared to be progressing towards a deal after general manager Kyle Dubas travelled to Switzerland for a one-on-one meeting with Nylander on Oct. 17 and Dubas was spotted in New York speaking to Nylander's agent last Sunday night, but things have since seemed to have gone cold. The restricted free agent has just over one month to sign in order to be eligible to play this season in the NHL.

Dreger added that the Leafs will have to begin to think about trading Nylander if a deal can't be reached in the near future.

“I think the Leafs at least have to consider it very soon, don’t they?” Dreger told First Up. “And we’ve talked about that in the past. Everything is based on a timeline. And you go to December 1 and you back it up from there, the point where William Nylander is no longer eligible to play in the NHL. That’s not an option that he should be willing to consider, nor should the Leafs be thinking about that either. But you do have to back it up from there.

“So if you’re not making meaningful progress – and to your point, the face-to-face didn’t develop into anything progressive, other than maybe ongoing dialogue – I think you have to at least consider what your other trade options are. I believe that would be the case late October - where we’re at now - or into the first week of November. Not that they would trade him by that point, but that they’d seriously have to start listening to some of the interest.

“There’s no shortage of interest in William Nylander. If I was going to handicap this, I’d put the Carolina Hurricanes right near the top of the page of teams that are interested in Nylander.”

The 22-year-old was believed to be looking for a salary above $8 million on a long-term deal, while the Maple Leafs have reportedly countered with an offer around $6 million. The Maple Leafs, to this point, have not expressed any interest in trading the winger.

"The Toronto Maple Leafs, when teams call on William Nylander they say we’re not trading him," TSN Hockey Insider Bob McKenzie said last week. "That is not part of the plan. Doesn’t matter how many times you say it, people will still want to believe that maybe there’s going to be a trade out there. And way, way, way down the road that might be an option, but this is not even something that’s being considered. Kyle Dubas was in New York to meet Lewis Gross and he saw a game in Philadelphia, case closed.

Nylander, who scored 20 goals and posted 61 points this season, has missed the first 11 games of the season to date and will miss another Monday when the Leafs host the Calgary Flames.