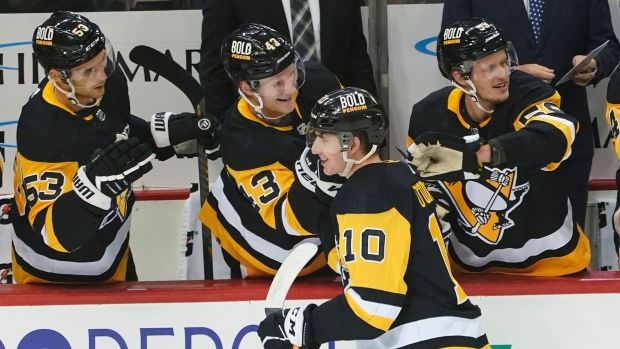 Drew O’Connor scored his first NHL goal, Danton Heinen got his third in three games and Pittsburgh tallied four times in the first period to beat the Chicago Blackhawks 5-2 in its home opener Saturday night.

“We still have a fair amount of skill in our lineup that’s very capable of scoring goals,” Sullivan said. “I give our guys credit, they’re playing hard and collectively as a group. When we play the game a certain way, we’re going to give ourselves a chance.”

Brock McGinn scored his first goal with the Penguins and Teddy Blueger added his second of the season, both in the first period. Jason Zucker also scored for Pittsburgh, and Tristan Jarry made 18 saves.

Patrick Kane scored his first goal this season, on the power play, and Kirby Dach had his second, but the Blackhawks couldn’t recover from a slow start. Pittsburgh had four goals in the first period, while the Blackhawks managed just three shots.

“It’s certainly not the start we wanted,” coach Jeremy Colliton said. “We were under fire for most of the first period.”

Fleury, the No. 1 overall draft pick in 2003, spent his first 13 seasons in Pittsburgh and helped the Penguins win three Stanley Cup titles before Vegas selected him in the 2017 expansion draft.

“Obviously, feel bad leaving (Fleury) out to dry,” Kane said. “Especially him coming back to Pittsburgh, to perform like that in front of him in the first period is unacceptable.”

Blueger scored 15 seconds into the game. Off a rush, he tried a pass to Zach Aston-Reese, but the puck hit a Blackhawks defender and rolled between Fleury’s pads.

Fleury’s puck-handling gaffe behind the net led to Pittsburgh’s second goal. Dominik Simon’s forecheck in the corner forced Fleury to misplay the puck to the front of the net where O’Connor tapped it in for his first career goal.

“It wasn’t the greatest goal, but it went in,” O’Connor said.

Pittsburgh chased Fleury with two more goals in a 26-second span. McGinn scored his first with the Penguins, finishing a 2-on-1 from O’Connor to make it 3-0. Soon after, Heinen lifted a shot underneath the crossbar from the slot for the first three-game goal streak of his career.

MINUS CROSBY AND MALKIN

Crosby and Malkin were announced to the crowd as part of pregame introductions, but both were out of the lineup for the third straight game. Pittsburgh is 2-0-1 this season without its star centers, earning five of six possible points.

Crosby, the Penguins’ captain, had wrist surgery in September, but he’s been practicing with the team for the last week. Malkin remains sidelined after he underwent knee surgery in June.

Since the beginning of the 2006-07 season, Pittsburgh has played 55 games without Crosby and Malkin. In those games, the Penguins have gone 33-15-7.

“We have great players up and down the lineup, and we feel we can produce,” Zucker said. “We’ve had a lot of guys scoring goals. It’s been a good collective effort for us.”

The Penguins, one of the best home teams in the league last season, have 11 wins and points in 13 of their last 14 home games dating to last season.

Chicago played its third straight game against a team hosting its home opener. The Blackhawks have allowed eight first-period goals in three games. They fell behind 3-1 against Colorado and 1-0 in an overtime loss to New Jersey on Friday.

SULLY AT THE TOP

Since Sullivan took over as coach on Dec. 12, 2015, Pittsburgh’s 253 regular-season wins rank third in the league behind Tampa Bay and Washington.

In 428 career games with Pittsburgh, Sullivan is 253-131-44. His points percentage still ranks second-best in franchise history behind Bylsma’s .668.

Sullivan, named coach of the 2022 U.S. Olympic Hockey Team, was the first American-born coach to win two Stanley Cups. He’s the fourth American-born to 300-plus wins.

“He’s got that next-man-up mentality,” Penguins defenseman John Marino said. “We’ve had a lot of injuries the past couple years, but as it's showing, guys have stepped up. He instills that confidence in us.”

Penguins: Continue an eight-game homestand, their longest of the season, Tuesday against Dallas.