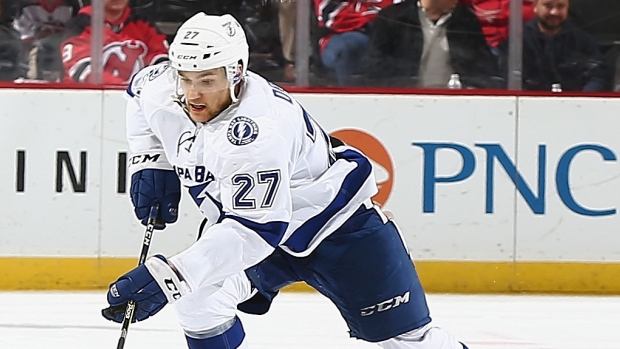 NEWARK, N.J. - Jonathan Drouin is already making the most of his second chance with the Tampa Bay Lightning.

Suspended by Tampa Bay for leaving a minor league assignment, Drouin scored the winning goal in his first NHL game in more than three months and the Lightning clinched home-ice advantage for the first round of the playoffs with a 4-2 victory over the New Jersey Devils on Thursday night.

"It's been a weird season," Drouin said. "It feels great to be back up here playing hockey, the thing I wanted to do. You realize sitting at home is not what you want to do."

Drouin started an injury-filled season with the Lightning and asked for a trade when the Lightning sent him to Syracuse of the AHL. When he didn't get it, the No. 3 pick in the 2013 draft went home. He didn't return until early March when general manager Steve Yzerman gave him a second chance.

"It was missing the game, missing your teammates, being around the rink," Drouin said. "Sitting at home and waking up to go work out in January and February is definitely a little different."

With Steven Stamkos (blood clot) and Ryan Callahan (lower body) out, the Lightning recalled the 21-year-old Drouin on Thursday, and it paid off.

With the Lightning leading 2-1 in the third period, Drouin took the puck from Patrik Elias in centre ice, made a pass to Vladislav Namestnikov and then took a return pass before skating in and beating Kinkaid between the pads with a shot from the right circle at 3:50. It was his third goal in 20 games with Tampa Bay this season. He started the season with them before behind sent to the minors, which upset him.

"I am happy for him," Lightning coach Jon Cooper said. "We brought him back because he earned his spot down in the American League and tonight he steps in the lineup and helps us win a hockey game. I am really happy for him."

Cooper said the team was excited for the well-liked 21-year-old Drouin, who led the Lightning with four shots.

"He is an offensive threat," Cooper said. "When he has his feet moving and gets some open ice, that kid can make some plays, as he did tonight on the winning goal."

Defenceman Matt Carle said it was good to see Drouin have success.

"He hasn't changed as a player," Carle said. "He's still buzzing around out there. You can see the skill level hasn't declined at all."

Eric Condra and Cedric Paquette also scored and Ben Bishop made 20 saves as the Lightning snapped a two-game losing streak and won for only the third time in seven games. Valtteri Filppula scored an empty-net goal in the final minute.

The Lightning, who will finish the regular season at Montreal on Saturday, will face either Boston or Detroit in the opening round.

Sergey Kalinin scored twice for the Devils, who have now missed the playoffs the past four seasons and five of six. Keith Kinkaid made 18 saves for New Jersey, which wraps up the season at home on Saturday against Toronto.

Kalinin capped his first two-goal game with a bad-angle shot after Bobby Farnham forced a turnover.

"It's nice for the emotion to score, but you don't want to lose. We have to win (Saturday)," Kalinin said.

Paquette had given the Lightning a 2-1 with 5:15 left in the second period, beating Kinkaid in close off a nice pass by Filppula.

Kalinin, who had not scored in 19 games, had tied the game at 1-all at 7:16 of the second period, deflecting a John Moore point shot past Bishop, who earlier in the game stopped break-ins by Farnham and Kyle Palmieri.

Condra scored in the opening period, netting his own rebound.

NOTES: The Lightning also called up D Matt Taormina from Syracuse before the game with Victor Hedman out with an upper-body injury. ... Devils fourth-line C Stephen Gionta ended a 12-game point drought with two assists. ... The win was the Lightning's 21st on the road, one shy of the franchise record