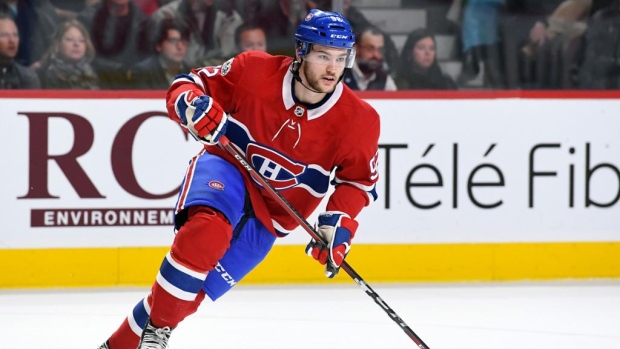 With the Montreal Canadiens battling for a wild-card spot in the Stanley Cup playoffs, the team is looking for as much offence as possible to support Carey Price.

And all eyes have been on Jonathan Drouin’s recent struggles on the scoreboard.

The Habs winger has been unable to help produce offence over the last few weeks and had just 9:57 in playing time in Montreal’s 2-1 overtime loss to Carolina on Sunday.

His play has drawn plenty of scrutiny in the city, something that Drouin has not avoided.

"That's one thing about Montreal," he told reporters as the team prepared for Tuesday's game against the Florida Panthers. "Someone turns it over six times, his name's not named. When Jonathan Drouin turns one over, it's on Twitter, it's on the media, everyone talks about it. So for me, I don't control what people say.

“If I have one turnover a game - everyone turns the puck over - it's hockey. I think I've been keeping my game pretty simple, chipping the pucks in and playing simple hockey. I'm not kinda trying to dangle everyone in the past 10 games, I don't think."

Drouin snapped an 18-game goal drought in last Thursday's 4-0 win over the New York Islanders, but averaged just over 12 minutes in ice time in the next two games due to a couple of turnovers, which led to head coach Claude Julien benching him. While his line with Joel Armia and Jesperi Kotkaniemi is the Habs' third line, Julien has been giving them fourth-line minutes.

"We had a little chat," Drouin said about staying in communication with his coach. "That's between me and Claude. That's the stuff you work on.

"…I've learned to understand where we are in the standings and you still find a way to help the team if you're low in minutes. Everyone's been there. I'm not the first player who's gonna be demoted to the fourth or third line. It's about finding a way of playing that game and helping your team."

Despite his struggles, the 23-year-old has 18 goals (a five-goal improvement from last season) and is on pace to top his career-high 53 points from two seasons ago.