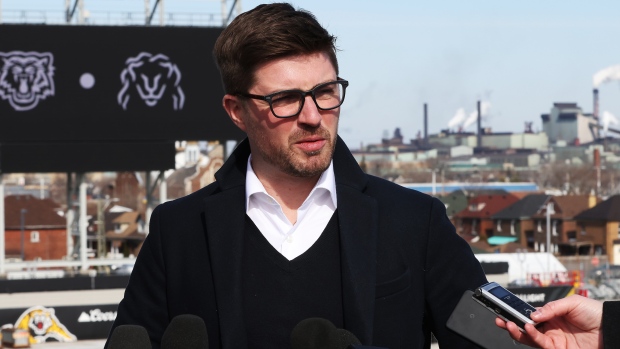 TSN Toronto Reporter Mark Masters reports on the Maple Leafs, who practised at the Ford Performance Centre on Friday ahead of Saturday’s game against the Vancouver Canucks. Leafs general manager Kyle Dubas held a media availability at Tim Hortons Field in Hamilton ahead of the 2022 NHL Heritage Classic between the Leafs and Buffalo Sabres on Sunday, March 13.

With salary cap space limited, Kyle Dubas will likely only be able to make one significant add to the Leafs roster before the March 21 trade deadline. So, what's the focus?

"At this time, it will be more on defence," the general manager revealed during a media availability in Hamilton to promote the upcoming Heritage Classic between Toronto and Buffalo. "We still have quite a bit of flexibility to get creative and try to make something happen."

The wild card is Jake Muzzin, who is sidelined with a concussion sustained on Feb. 21. The defenceman's cap hit is $5.65 million and if he remains on the long-term injured reserve until the playoffs that would give Dubas even more flexibility.

"Unless we get the news we don't want on Muzz, I think we will just have the one move left," Dubas confirmed. "It is not one of these things where we are going to wait and try to have him come back in the playoffs. With a style of a player like him, if he is healthy and good to go, we need to get him up, playing and in-form before the playoffs."

Muzzin, 33, also sustained a concussion in January and admitted he was tentative when it came to the physical side of the game once he returned.

"We have to be really careful with him," Dubas stressed. "It is two concussions in a very brief amount of time. We are going to continue to be slow and cautious."

The Leafs are allowing 2.89 goals against per game this season, which ranks 15th in the NHL entering Friday's games.

"The thing about the group that gives me a lot of faith is that, throughout the season, when they have to dial it in, they have dialled it in really well and defended really well as a group," Dubas said. "I'd like it to be a little bit more consistent, but we are back into an 82-game season now. You are going to have your ups and downs. That is sometimes just the way it goes."

Since Dec. 1, Jack Campbell (20 games) and Petr Mrazek (12 games) own identical .893 save percentages, but Dubas isn't looking for goaltending help.

"We have two guys that have been good goaltenders," Dubas said. "Jack played at an All-Star level this year. Petr Mrazek has played 300 games — or nearing that (289) — and has been a good goaltender in his career. Petr, especially of late, has had a game against Minnesota at home and a game at Washington where he was very good."

Plagued by a groin injury in the first half, Mrazek started consecutive games for the first time as a Leaf this week. He allowed five goals on 31 shots in Wednesday's loss to the Sabres.

"I don't think goaltending was the issue in the last game," Dubas said. "We tend to get a little bit game-to-game in this marketplace."

Since Dec. 1, the Leafs rank 31st in five-on-five save percentage, but Dubas gave a vote of confidence to Toronto's tandem on Friday.

"I am not concerned about either one of them," he insisted. "They have both shown themselves to be good goalies and they will be."

Campbell will get the start on Saturday against the Vancouver Canucks. It will be his first appearance since getting pulled in Detroit where he allowed five goals on 25 shots last Saturday.

John Tavares has gone 18 games without a goal in five-on-five play while William Nylander has just four even-strength tallies in that stretch, which dates back to mid-January.

"If you are looking at their pace for the entire season, they are on pace to have excellent years for us," Dubas pointed out. "They are really competitive, proud people. To me, I don't even measure it so much [by offence] ... They are both such good players. They can contribute in other ways. That, to me, is the key. Both have done that."

"In Washington, John's play won us the game," Dubas highlighted. "He and Justin Holl combined to make that play to [Rasmus] Sandin at the end ... William scored in back-to-back games there leading into the game on Wednesday night."

Tavares and Nylander may have a new left winger on Saturday as Nick Robertson skated in that second-line spot at practice.

"If I get the opportunity I definitely want to make the most of it," the 20-year-old told reporters. "I got to complement those guys as best as possible."

"We wanted to get him some reps with those guys on that line," coach Sheldon Keefe explained. "Even practising higher up in the lineup is a little bit different in terms of where the plays are, how the plays are made, how the puck moves around and the pace. I wanted him to have that experience in practice."

Robertson, the team's top pick in the 2019 draft, has started on the fourth line in the three games he's played since being recalled from the American Hockey League.

"We've been trying to get a sense of where he is at in his development and what he might be able to provide," Keefe continued. "We're familiar with him given that he has played for us in the past, but just want to see where he is at coming off of his injury. That is really what this recall has been out from my perspective — kind of spot him in and give him an opportunity. I think he has done well with the time he has gotten."

Robertson sustained a broken leg in his second game with the Marlies this season.

"It's just building the minutes and gaining my confidence," he said. "Coming back from a leg injury, it's only my 10th game in total."

After missing the last two games with an undisclosed injury, Ondrej Kase returned to practice on Friday, but did not skate on a regular line and his status for Saturday's game remains up in the air.

The Leafs have gone seven games without a power-play goal, which is their longest drought this season. The team experimented with a new look this week with Auston Matthews getting time in the middle/bumper spot.

"It gives the opponent lots more to think about both in their preparation and in the power plays," said Keefe. "When Auston is static in one place, it is a lot easier to track. You can find that lane and set your coverage and positioning. As he moves and others move, the threats change, the angles change and it forces the opposition to communicate and sort it all out. We want our power play to be dynamic and to move around."

Matthews, who leads the team with 12 man-advantage markers, has been lining up on the flank most of the season.

Despite the recent dry spell, Toronto still leads the league with a 29 per cent conversion rate.

"Really, for us right now, we want the puck to move around more than anything," Keefe said. "I thought our power play was okay the other night. We obviously didn't get a lot of opportunities to get it working, but I thought we did a good job of getting set, moving it around and getting some shots."

The Leafs only had one power play against the Sabres. Following an 0-for-4 outing in Washington, Keefe noted that opposing teams were doing a better job game planning for Toronto's power play.

"We have made it pretty clear around the league that our power play is dangerous," Keefe said. "Teams are taking note of that. I would be certain that teams see us coming up on the calendar and their coaches are getting to work two or three games ahead. I have been in that position myself when you see good power plays coming in. You're getting ahead of it and working hard on it because you don't want to look bad. Teams have done that. It is on us to counter that now."

This is Toronto's worst stretch on the power play since a six-game lull in October.

The Leafs are coming off a listless loss to the Sabres, who snapped a six-game skid on Wednesday in Toronto.

"I was obviously really disappointed," Dubas said of the 5-1 defeat. "I was most disappointed about the fact that in the third period, we didn't make any type of push. It shouldn't be a surprise that Buffalo is going to play us really well ... They are laying in front of slap shots, blocking them and were just at a different level of desperation than we had. That is the second time in a week and a half that we played a team where, for whatever reason, in Montreal and at home against Buffalo, we expect it is going to be easy. In this league, it is not. It is something we have to get cleaned up here."

Toronto's next five games will be against teams outside a playoff position, including a rematch outdoors against Buffalo on March 13.

Keefe responded to the dud with a longer-than-usual practice.

"We had the day off yesterday," the coach noted. "These opportunities to practice like today are few and far between where we haven't played the night before. We had some extra things we wanted to pile in. We got started a little bit later than we wanted today so that made the day seem a little bit longer than it perhaps really was. Practice time is not going to be readily available for us for a little while after this."

In the wake of Russia's invasion of Ukraine, Dubas revealed that the team has increased security around Russian players Ilya Mikheyev and Ilya Lyubushkin.

"We talked to both of the players," Dubas said. "There have been no issues reported to them or anything towards them or their families. We just continue to monitor it. They are members of our team and we care about them. We want to make sure they are safe and we are taking care of them as best we can. Anything that comes up, they know to report it in right away."

Sandin missed Friday's practice due to a non-COVID illness.