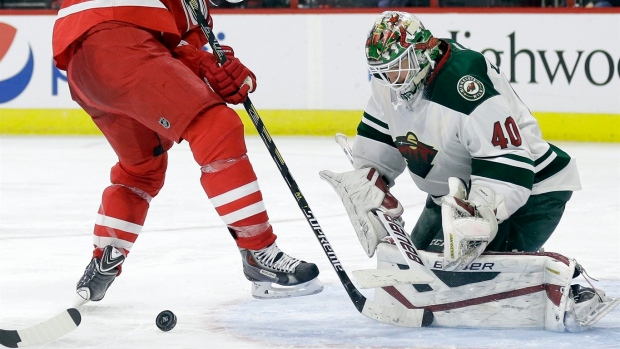 NEW YORK, N.Y. - Goalies Devan Dubnyk of Minnesota and Andrew Hammond of Ottawa and defenceman Kris Letang of Pittsburgh are finalists for the Bill Masterton Memorial Trophy as NHL player who best exemplifies the qualities of perseverance, sportsmanship and dedication to hockey.

The local chapters of the Professional Hockey Writers Association submitted nominations at the end of the regular season and the top three vote-getters were announced Thursday as finalists. The winner will be announced June 24 during the NHL awards ceremony in Las Vegas.

Dubnyk led Minnesota to the playoffs following a trade with Arizona. He set a franchise record with 38 straight starts, going 27-9-2 with a 1.78 goals-against average, .936 save percentage and five shutouts with Minnesota. Dubnyk also is a finalist for the Vezina Trophy as the top goalie.

Hammond made his first NHL start Feb. 18 and led Ottawa's playoff push by posting a 20-1-2 record. Letang had 11 goals and 43 assists for Pittsburgh.