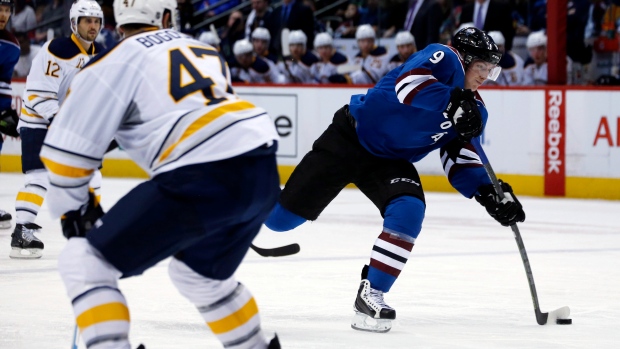 DENVER - Playoffs or not, the Colorado Avalanche are trying to finish the season strong.

Matt Duchene had a goal and two assists, Jarome Iginla had three assists and the Avalanche kept their slim post-season hopes alive with a 5-3 win over the Buffalo Sabres on Saturday night.

John Mitchell scored for the second straight game, and Marc-Andre Cliche, Tyson Barrie and Brad Stuart also had goals as the Avalanche won their second in a row.

Colorado is 12-6-1 since losing four straight in early February, but the surge might not be enough. The Avalanche trail Winnipeg by eight points for the last wild-card slot with seven games remaining.

"All we can do is enjoy playing these games, try to win them, play hard and try to do our part," Iginla said. "Right now, they still mean a lot in the standings. We know it'll take some great breaks and nice bounces to get in, but we're going to try to do our part."

Colorado was playing its fourth game in five nights — and it showed with a shaky third period. Buffalo outshot the Avalanche 18-7 and made it close before holding on.

"It's not the type of third period we'd like to see," coach Patrick Roy said, "but if you look at the schedule, I'm not surprised to see that."

Semyon Varlamov had 35 saves for the Avalanche, who have won nine straight against Buffalo.

Andrej Meszaros had two goals and fellow defenceman Rasmus Ristolainen had a goal and an assist for the Sabres.

The Sabres have scored the fewest goals in the NHL this season, and the loss of leading scorer Tyler Ennis to a left shoulder injury further depleted a struggling offence. Ennis was injured in Thursday's loss against Arizona.

"Nobody threw in the towel after the second," Meszaros said. "We picked ourselves up and battled hard, but it wasn't enough."

Colorado struck first with two goals in a span of 32 seconds in the first. Cliche scored his second of the season at 10:47, and Mitchell made it 2-0 with his 10th.

Matt Hackett replaced Anders Lindback in goal to start the second period, but he gave up goals to Barrie and Duchene to make it 4-0.

"It's one of those nights where things finally went into the net," said Duchene, who got his first goal in five games. "Tonight, our line was rolling a little bit. I wish we could have had that production on the road trip. It would have made the difference, especially in the Edmonton and Calgary games. It's a little disappointing that we weren't able to find that earlier, but we'll take it tonight."

Lindback finished with 10 saves, while Hackett had seven.

The goals came quickly in the third. Meszaros broke up the shutout at 3:09, but Stuart scored at 4:48 to make it 5-2. Meszaros struck again 41 seconds later with his fifth of the season.

Ristolainen made it 5-3 with his seventh.

"We played well in the last 20 minutes," forward Marcus Foligno said. "It would have been a different game if we had played that way for all 60 minutes."

NOTES: The Sabres' last win against Colorado was Dec. 4, 2005, in Denver. ... Iginla's three assists gave him 1,222 career points. He moved past Jean Beliveau for 40th in scoring. ... Buffalo C Tim Schaller was recalled from Rochester of the AHL. ... Barrie's goal was the 100th point of his career.