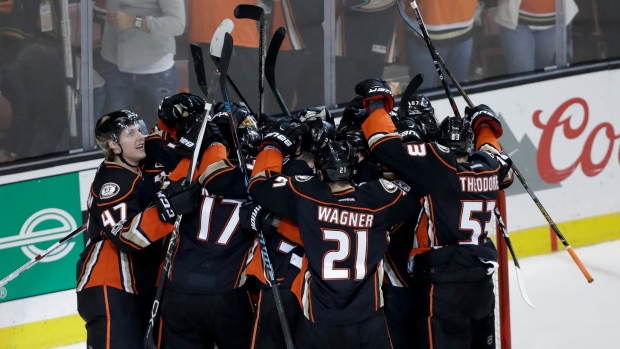 ANAHEIM, Calif. — Nick Ritchie scored the winning goal 3:21 into the third period as the Anaheim Ducks defeated the Edmonton Oilers 2-1 in Game 7 on Wednesday night to win their second-round series.

Andrew Cogliano also scored and John Gibson made 23 saves for the Ducks, who had lost five consecutive Game 7s.

Drake Caggiula had a goal and Cam Talbot made 28 saves for the Oilers, who fell to 3-3 all-time when playing Game 7 on the road.

Anaheim will host the Nashville Predators in Game 1 of the Western Conference final on Friday.

The Ducks hadn't led at home in regulation since Mark Letestu scored 6:22 into the first and tied Game 1 up 1-1, but Ritchie changed that early in the third by firing a wrist shot under Talbot's right arm. Sami Vatanen found Ritchie in the near circle for his first point of the post-season, while Ritchie hadn't contributed a point since Game 3 against the Calgary Flames.

Ritchie's goal reversed the Oilers' seeming mastery in Orange County. After controlling the first three games played at Honda Center up until the final 3:16 of regulation in Game 5, the Oilers got back into that groove 3:31 into the first. Caggiula challenged defenceman Shea Theodore as he took the puck out from behind the Ducks' net, with Caggiula's stick striking the puck to put it over Gibson's right leg and trickling in.

It was Caggiula's third goal in the last four games, and added to the Ducks' recent history of Game 7 woe.

Playing in Game 7 at home for the fourth straight season, Anaheim has been outscored 8-0 in the first period of those games. Caggiula's opportunistic score had the Ducks playing from behind inside the opening 6:19 for the fourth year in a row, but they avoided conceding a second goal in the first 20 minutes unlike their previous home-ice flameouts.

Anaheim was inches away from tying the game late in the period, as the officials correctly saw that the puck barely crossed over the blue line to go offsides before Cam Fowler retrieved it and fired a shot past Talbot.

The Ducks finally succeeded in tying the game up 8:55 into the second. Talbot got turned around as Ryan Kesler was attacking the crease before ending up face down on the ice and in no position to stop Cogliano's soft backhand swat of a loose puck.

Cogliano's first goal of the playoffs energized the home team and fans, forcing Kris Russell to block Antoine Vermette's shot from sailing into an open net less than 30 seconds later. The Ducks kept the pressure on, with Ritchie and Rickard Rakell each getting great looks. The Oilers only seemed to recover in the closing minute, creating two chances before returning to the dressing room.

The Oilers pulled Talbot with 2:06 remaining and spent nearly all of the next minute in the offensive zone. Patrick Maroon had a shot turned away by Gibson. After the Ducks iced the puck and used their timeout with 1:03 to go, Edmonton never had another shot on goal.