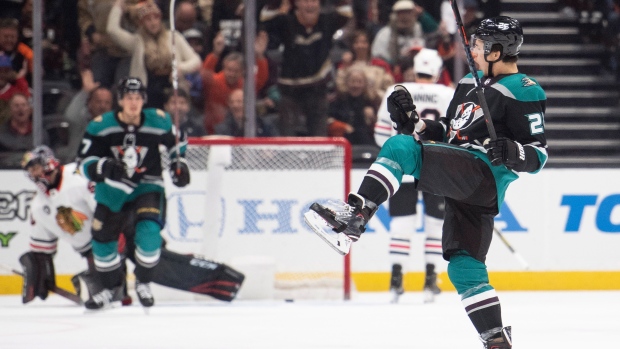 ANAHEIM, Calif. — Ondrej Kase scored four minutes into the third period to lift the Anaheim Ducks over the Chicago Blackhawks 4-2 on Wednesday night for their fifth straight win.

Anaheim matched Toronto for the longest active winning streak in the league. Brandon Montour and Daniel Sprong, who was making his Ducks debut, scored 20 seconds apart in the first period, and Jakob Silfverberg added an empty-net goal. John Gibson made 25 saves.

Erik Gustafsson and Alex DeBrincat scored in the second period, and Corey Crawford stopped 28 shots for the Blackhawks, who have dropped five straight and seven of eight.

The Ducks came into the game next-to-last in the NHL in first-period goals but scored a pair in the first 20 minutes for only the third time this season. Montour took a pass from Pontus Aberg near the blue line and fired a 54-foot wrist shot past a screened Crawford for his third of the season less than six minutes in. Sprong, who was acquired in a trade from Pittsburgh on Monday, then beat Crawford top shelf with a shot at a sharp angle.

SAN JOSE, Calif. (AP) — Timo Meier had a goal and two assists in his return to San Jose's lineup, Martin Jones made 39 saves and the Sharks bounced back from a rough road trip by beating Carolina.

Barclay Goodrow and Tomas Hertl got San Jose started with goals in the first period, captain Joe Pavelski added his team-leading 18th in the second period and Marcus Sorensen scored in the third to give the Sharks a convincing victory.

Lucas Wallmark scored on the power play for the Hurricanes, who have scored just five goals in the past five games, losing four of them. Curtis McElhinney made 18 saves.

The Sharks had been outscored 20-7 in losing the first four games on their recent road trip before salvaging it a bit with a 3-1 win in Montreal. They built on that momentum against the Hurricanes with Kevin Labanc setting up two goals in the first 10:10 and Jones stopping 17 shots in the first.

Cam Talbot made 28 saves, plus two more in the shootout to win for the first time in seven tries dating to Oct. 28.

Ivan Barbashev and Brayden Schenn scored for the Blues, who lost for the fourth time in their last five games. Jake Allen made 34 saves.