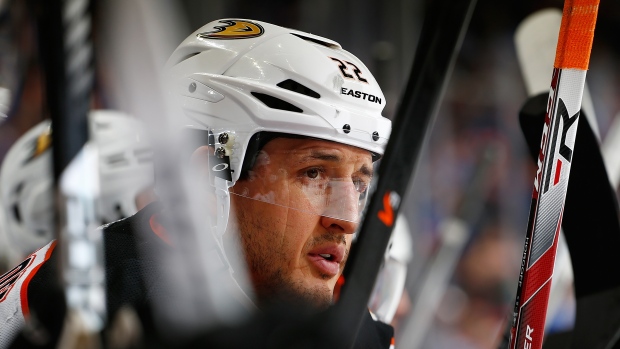 The suspension is accompanied by mandatory referral to the NHL/NHLPA program for substance abuse and behavioural health for evaluation and possible treatment.

"This morning we were made aware of the situation regarding Shawn Horcoff. The Anaheim Ducks organization fully supports the NHL/NHLPA performance enhancing substances program," Ducks general manager Bob Murray said in a statement. "We will also continue to support Shawn as a player and person throughout this process.

"We will have no further comment at this time."

Based on his average annual salary, Horcoff will forfeit US$357,526.88. The NHL said it will have no further comment on his suspension.

Horcoff, 37, has six goals and four assists in 45 games with Anaheim this season. He has 186 goals and 320 assists over 15 NHL season with Edmonton, Dallas and Anaheim.

Horcoff is the first NHL player suspended since November 2014, when Toronto Maple Leafs forward Carter Ashton was banned for 20 games by the league after failing a drug test. Ashton said at the time he inadvertently ingested clenbuterol, a prohibited substance, after using another athlete's inhaler during an asthma attack.