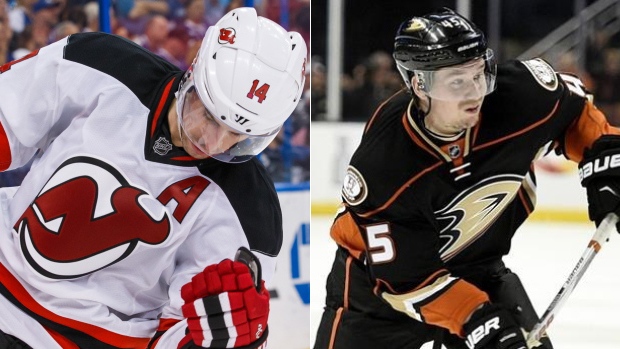 The Anaheim Ducks have acquired centres Adam Henrique and Joseph Blandisi along with a 2018 third-round draft pick from the New Jersey Devils for defenceman Sami Vatanen and a conditional draft pick.

A native of Brantford, Ont., Henrique is in his ninth NHL season. He has appeared in 24 games with the Devils this season, tallying four goals and 10 assists. He has been playing left wing this season, with first overall pick Nico Hischier and Travis Zajac owning the top-six centre roles.

The Ducks have been riddled with injuries and own a 11-10-4 record this season. Anaheim is currently without forwards Ryan Getzlaf, Ryan Kesler and Patrick Eaves, with Getzlaf and Kesler not expected to return in late December or early January. Eaves' return date is unknown as he recovers from Guillain-Barre syndrome.

Originally taken in the third round of the 2008 NHL Entry Draft out of the OHL's Windsor Spitfires, the 27-year-old Henrique has 122 goals and 135 assists in 455 career contests. He notched a career-high 30 goals in the 2015-16 campaign.

Henrique is in the fifth year of a six-year deal which carries a cap hit of $4 million per season.

Blandisi, 23, is in his second season with the Devils, after being taken in sixth round of the 2012 draft by the Colorado Avalanche out of the OHL's Barrie Colts. In 27 games this season, the Markham, Ont. native has three goals and six assists.

In his sixth NHL season, all with the Ducks, Vatanen is averaging 21:06 of ice time a night. A right-shot defenceman, Vatanen has a goal and three assists in 15 games this season. He made his season debut on Oct. 28 after undergoing off-season shoulder surgery.

A native of Jyvaskla, Finland, Vatanen was a fourth-round selection of the Ducks in 2009. In 280 career games, the 26-year-old Vatanen has 33 goals and 93 assists.

"In acquiring Sami, we bring on a right shot, top-four defenceman who can play in all situations," Devils general manager Ray Shero said in a release. "This move also gives us contract certainty on the back end for the next two-plus years. When acquiring a defenceman like Vatanen, you have to give back quality assets or players in return. That is the case in this situation with Adam and Joe. Adam has been a key member of our organization for nearly ten years since he was drafted. His contributions both on and off the ice will always be appreciated by our organization and fans. For Joe, this is a great opportunity with a quality organization like Anaheim and I am happy for him.

"This also says a great deal about our other forwards in Binghamton and those who have taken the next step in New Jersey. I am excited they continue to push and provide us quality depth and competition from within."

After this season, Vatanen has two years remaining on a four-year deal with an annual average value of $4.875 million.

TSN Hockey Insider Pierre LeBrun reports no salary was retained in the trade as both Vatanen and Henrique are making exactly $5 million in salary this season.

Devils, I don't think, ever offered Shattenkirk more than 4 years last July 1. Now they get Vatanen for two and a half years at a reasonable $4.875 M AAV

The Devils have been one of the bigger surprises of the early season in the NHL, posting a 14-6-4 record.

The Ducks and Devils will meet on Dec. 18 in New Jersey.