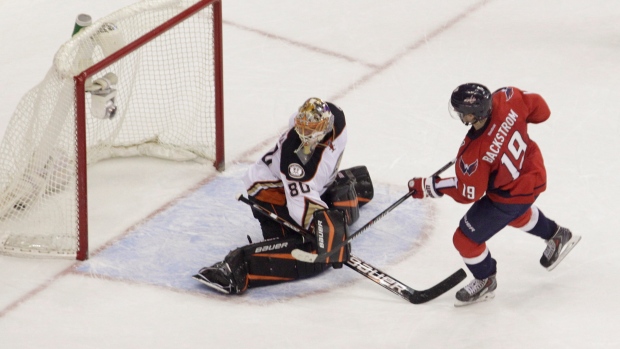 Ilya Bryzgalov's second tenure with the Anaheim Ducks appears to be over.

The club placed the 34-year-old netminder on unconditional ($125) waivers.

The Ducks later announced that "Bryzgalov will return to his family home in Philadelphia and not play for the remainder of the regular season." The Russian was assigned to Norfolk of the American Hockey League on Feb. 24 and made the decision to go home instead after discussing the situation with his family and agent.

Bryzgalov appeared in eight games with the Ducks after being signed to a one-year deal on Dec. 9. He has posted a 1-4-1 record with the Ducks this season with an .847 save percentage and a 4.19 goals-against average.

In 465 career NHL games, Bryzgalov has posted a 221-162-54 record with a .912 save percentage and a 2.58 GAA. Originally selected by the then-Mighty Ducks of Anaheim in the second round (44th overall) of the 2000 NHL Entry Draft, Bryzgalov has seen NHL action with the Ducks, Phoenix Coyotes, Philadelphia Flyers, Edmonton Oilers and Minnesota Wild.

Bryzgalov has represented Russia internationally on a number of occasions, including winning silver at the 2000 World Junior Championships. bronze at the 2002 Olympic Games in Salt Lake City and gold at the 2009 IIHF World Championships.