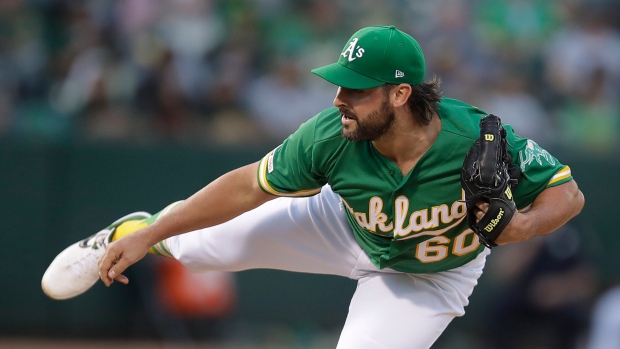 Quiet on the first two days of the 2019 MLB Winter Meetings inside the Manchester Grand Hyatt on the shores of the Pacific Coast in San Diego, the Blue Jays struck Wednesday by agreeing to terms with right-handed starter Tanner Roark, according to a source.

The deal is a two-year pact worth a total of $24 million, and will be made official once the 33-year-old passes a physical.

Roark isn’t Gerrit Cole, who the New York Yankees reeled in late Tuesday night with a monster deal that will pay him $324 million over the next nine years, but he’s a clear rotation upgrade for Atkins & Co., giving the Jays a reliable mid-rotation starter with a history of staying healthy and taking the ball every fifth day.

With the ink on the contract still drying and not yet official, Atkins declined to comment on Roark specifically Wednesday, but there’s no doubt durability and reliability is the draw here.

“It’s not that we went into this free-agent season or off-season thinking we have to get guys that have only been durable, but that is a very important piece to the equation in almost every starting pitcher category,” Atkins said. “Starting pitchers who are dependable, reliable, who also get very high strikeout rates and don’t walk guys and keep the ball in the ballpark end up getting the type of contract that you see at the very, very top of the market. They are rare, guys who do all of those things.”

The latter are the Cole types. Roark at least has the dependability part down pat.

Once the meetings wrap up Thursday morning with the Rule 5 draft, Atkins will board a flight back to Toronto, but there’s a sense more could happen prior to the holidays and the trade market is still seen as an avenue to improve now that free-agent options are coming off the board.

No, the Roark signing isn’t going to satisfy Blue Jays fans clamouring for massive improvement — nor should it, not even close — but they’re a better team today than they were yesterday, and that’s at least a start.

It’s not a sexy one, though.

Roark’s overall body of work across seven big-league seasons — the majority of it coming with the Washington Nationals — is solid enough, as the Illinois native and 25th-round pick of the Texas Rangers in 2008 holds a career 3.71 ERA.

That’s a really good ceiling for the modest price, but Roark has authored ERAs over 4.24 in four of the last five seasons, and that range should be the realistic projection moving forward.

With a career high of 210 innings (2016), the burly righty has also made 30-plus starts in five of the last six campaigns, making him by far the most reliable arm on the current Blue Jays staff.

One potential red flag, however, is Roark’s first go-round in the American League after he was traded from the Cincinnati Reds to the Oakland Athletics at the trade deadline this year.

Even with all that being said, Roark’s 2.0 fWAR season would’ve led last year’s Blue Jays rotation.

It will be interesting to watch the veteran and his five-pitch mix — he uses two different 92-mph fastballs, a slider, a curveball and a changeup — adjust to life in the AL East, a division littered with playoff teams, tough lineups, and bandbox ballparks.

As it stands today, assuming all arms are healthy when we get to the end of March, Roark would lead a rotation that includes last month’s trade acquisition, Chase Anderson, veteran Matt Shoemaker, lefty Ryan Borucki, who’s returning from a lost season due to bone spurs in his elbow, and Trent Thornton.

It’s very likely they’re not done adding to the rotation so that projection should change at some point this winter, while it’s also smart to expect some sort of injury changing it again during spring training, which would throw youngsters Anthony Kay, Jacob Waguespack and T.J. Zeuch into the mix.

Top prospect Nate Pearson isn’t going to break camp with the big club, but he’ll enter the mix at some point, likely in June or July.