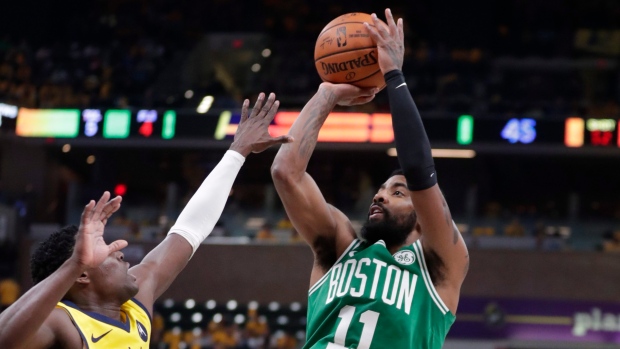 NEW YORK — Just three seasons ago, the Brooklyn Nets were the worst team in the NBA.

On Sunday, they were the story of the league.

They agreed to deals with superstars Kevin Durant and Kyrie Irving as part of a sensational start to free agency, giving the longtime No. 2 team in New York top billing in the Big Apple.

They landed two of the top players available, both perennial All-Stars and NBA champions, and they weren't finished. They also added centre DeAndre Jordan, who played with Durant and Irving on the 2016 U.S. Olympic team that won the gold medal, and veteran swingman Garrett Temple.

It was such a powerful victory that the crosstown Knicks even put out a statement acknowledging their fans' disappointment, just three hours after shopping season had started.

And it was even more remarkable given where the Nets were not long ago.

An ill-fated trade with Boston in 2013, when the Nets acquired Kevin Garnett and Paul Pierce in hopes of competing for a championship but didn't even get out of the second round, cost them years of high draft picks and contributed to them becoming the worst team in the league.

They bottomed out at 20-62 in 2016-17, when Durant won NBA Finals MVP in his first season with Golden State after the Warriors beat Irving's Cleveland Cavaliers for the title.

Now those players will try to win one together.

Irving, who grew up in New Jersey, said in a video posted Monday by his representation at Roc Nation Sports that he always wanted to play back home. Part of the video was shot with Irving on the Brooklyn Bridge.

"I wouldn't change anything about this journey, at all," Irving said. "It's brought me back here and that's home, and home is where my family is. Home is where I want my legacy to continue. And, I'm happy to be in Brooklyn."

Roc Nation, which announced Sunday it is now representing Irving, said he had agreed to a four-year, maximum contract .

He might have to wait a year to play with Durant, who could miss next season while recovering from a ruptured Achilles tendon. But with Irving taking controls of the offence and a promising young core around him, the Nets should be a playoff team, even while Durant recovers.

The Nets got back to the playoffs last season after going 42-40, stamping themselves as a team on the rise. Brooklyn might be able to keep rising all the way to the top after Sunday's moves.

Even after winning titles in his first two seasons with the Warriors, there was season-long speculation that Durant might leave. But much of that speculation had been focused on the Knicks, who had more than $70 million and the ability to sign two top free agents after trading Kristaps Porzingis during the season.

The Nets felt confident with what they could offer, from their roster, to their medical staff, to their facilities. And when they made a cap-clearing trade last month, they became even more attractive by freeing up salary to bring in two stars.

Irving wasn't expected to be one of them a few months ago, after he'd said last fall he planned to re-sign in Boston. But despite his good stats it was a bad season for him with the Celtics, who were considered an Eastern Conference favourite but instead lost in the second round.

Irving became frustrated and reconsidered his plans, deciding his future was not in Boston, but in Brooklyn. Now he'll play for the team he watched while growing up in New Jersey, where the Nets played before moving to Barclays Center in 2012.

Even when the Nets had better teams, the Knicks still got more attention and it sometimes felt as if they would always be the marquee team in the city.

That changed Sunday in a New York minute.

The Nets were not only the talk of the town but of the whole league, and when the Knicks were shut out early on, they took the rare step of commenting about their situation.

"While we understand that some Knicks fans could be disappointed with tonight's news, we continue to be upbeat and confident in our plans to rebuild the Knicks to compete for championships in the future, through the draft, targeted free agents and continuing to build around our core of young players," Knicks President Steve Mills said in a statement.

The Knicks eventually agreed to deals with forwards Julius Randle, Taj Gibson and Bobby Portis, so they did get something.

Just nowhere near as much as the Nets.