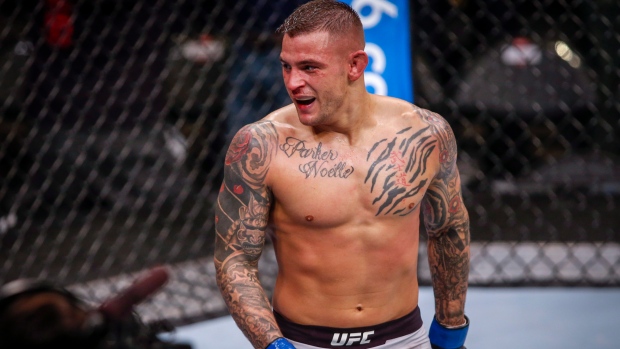 Dustin Poirier has grown and evolved as both a fighter and a person since he was dispatched in 1:46 by Conor McGregor at UFC 178. The soon to be 32-year-old will have a chance to put that evolution on display this Saturday in the main event of UFC 257, when he meets the former two-division champion in a rematch of their September 2014 clash.

Poirier has won 10 fights and the interim lightweight championship since his first-round loss to McGregor in a battle of two featherweights trying to prove they belong on the big stage.

This Saturday, the venue will shift from Las Vegas to Fight Island in Abu Dhabi, the weight class from 145 to 155 pounds and there will be another difference - both men have now firmly cemented their place in the upper echelon of the promotion with reputations for being must-watch fighters.

"We’ve established ourselves, this is two of the best fighters in the world in their primes competing for 25 minutes,” Poirier told TSN. “The fans should be excited.”

Not that McGregor is the type of person that needs a mental edge, but he could have one going into the bout already holding a head-to-head victory. For Poirier, that defeat is ancient history.

"The past has made me the person I am right here in front of you and I’m at peace with it.”

While McGregor predicts he will have his hand raised via KO inside the first minute of the fight, Poirier wants to push the action further and make it into a test of wills, the type of battle he has excelled at his entire career. He has a simple game plan to achieve that goal.

"To be smart, to not fight with emotion,” said Poirier. “To use my skill set and that’s just it, to be smart in there.”

Since suffering that TKO loss in their first bout, Poirier has posted a 10-2-1 record with one no-contest, earned eight performance bonuses and collected impressive wins over future and former UFC champions.

Poirier holds a marked advantage when it comes to comparing resumes since that night, but knows that his opponent has also improved since they last met in the Octagon.

"I’ve been busy, I’ve been in some scraps and I’ve been evolving,” said Poirier. “But I’m going to keep in my mind that he’s been in the gym as well, working hard and evolving and we’re both completely different fighters from that first fight.”

With much less tape available on McGregor, the Lafayette, Louisiana native is preparing to see the best of the former featherweight and lightweight champion.

"He’s crafty man, he’s unpredictable,” said Poirier. “In his fight with (Donald) Cerrone, he came out very aggressive, throwing shoulder strikes. He’s a good athlete, so I don’t know what to expect. I expect a competitive fight, I expect a well-rounded fighter at this point in his career and I’m just excited to get in there.”

Due to the pandemic, Poirier only fought once in 2020, a unanimous decision victory over Dan Hooker in June.

Fellow UFC fighter Neil Magny recently told TSN that he believes time spent in the gym when not preparing for a fight allows you to focus solely on yourself, a sentiment that Poirier agrees with.

"I feel like whenever you’re in training camp preparing for fights, you’re getting ready to beat a certain style of fighter, you’re getting ready to perform, you’re sharpening what you have and preparing for their skill set,” said Poirier. “Between fights, that’s when you really grow. You’re in the gym trying new stuff, having fun, it’s just a different kind of training atmosphere.”

"Fighting one time in 2020 might have been needed with that active schedule and with those crazy fights, maybe I needed a little bit of time off. It might have been good for me.”

Poirier and his wife Jolie started a non-profit organization called The Good Fight Foundation where, among other things, fight kits are auctioned off with the money used to help both in their community and around the world.

So in the midst of one of the great UFC careers, would the former interim lightweight champion rather be known for the work he does inside the Octagon or outside of it with his foundation?

"It’s probably equal. I want to have that history book, I want my name in there, but I fight for a lot of reasons,” said Poirier. “I’m very proud of the work me and the Good Fight Foundation have done and I feel like that transcends fighting. I fight for a lot of reasons and I’m proud of the reasons I fight, me and my family. I’m proud for the reach “Good Fight” gets and the publicity and the platform it gets with my fighting. I put that on my back and I carry it proudly.”