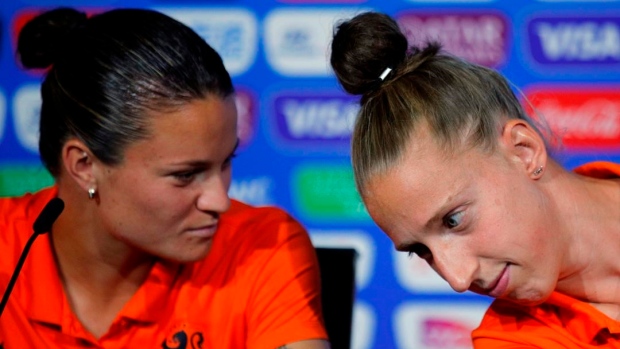 LYON, France — It's easy for Netherlands coach Sarina Wiegman to see the huge challenge facing her team Sunday in the Women's World Cup final against the United States.

She only needs to take one look at the scoring charts. Alex Morgan has six goals and Megan Rapinoe has five. The U.S. has scored 24 goals in six games, including a jaw-dropping 18 in the group stage.

"The chances of us going behind are big," Wiegman said Saturday. "We will need to be very focused and sharp, especially for the first 15 minutes."

The reigning European champions are in their first World Cup final; the U.S. aiming for a fourth world title.

"We're the underdog. I'm fine with that," Wiegman said through a translator at a news conference. "They have a lot of confidence, won many tournaments and (been) at the top level for a long time."

Luckily for Wiegman, she has Sari van Veenendaal in goal.

Van Veenendaal made one of the saves of the tournament in the 1-0 semifinal win against Sweden on Wednesday, a brilliant reflex stop low down as she tipped Nilla Fischer's close-range effort onto the post.

But she is up against far more clinical forwards this time.

"It's a different level," Van Veenendaal said. "But we've got good strikers as well, like Vivianne Miedema."

Van Veenendaal and the prolific Miedema are teammates on London-based Arsenal in England's Super League.

"I know how it feels to play with a striker with great qualities," Van Veenendaal said. "Hopefully she's prepared me well."

It should be a busy evening for the Dutch defence.

But there is reason for optimism because the U.S. has conceded one goal in all three knockout games. Spain looked dangerous in their round of 16 game, causing problems with quick breaks down the flanks.

"We'll definitely have an opportunity to get to them" said the 49-year-old Wiegman, a former midfielder who played for the North Carolina Tar Heels 30 years ago.

She was on the same team that season as famed U.S. forward Mia Hamm.

"What I picked up at the time was a huge positivity in developing team spirit," Wiegman said, reflecting on her time in the U.S. "I really felt a family feeling. In the Netherlands at the time, things were very different."

U.S. coach Jill Ellis started playing soccer seriously a teenager, once her family moved from England to the U.S.

Ellis anticipates a tougher challenge from the Netherlands than in the quarterfinal against France and the semifinal against England.

That's because the Dutch will take the game to the Americans.

"They like the ball and they want to have the ball. We've seen that other teams want us to have the ball so they can create more of a transition game," Ellis said. "They'll look to play in front of you and around, and they're excellent in their positioning. It's the 4-3-3 of the Dutch, it's what they live and breathe. They've probably seen it since they're 5 years old."

While Miedema has three tournament goals and 61 in 81 international games overall, Ellis is wary of midfielder Sherida Spitse's ability from free kicks and corners.

"She's a tremendous threat, so we can't give away cheap tackles and fouls," Ellis said of Spitse, who has four assists.

Rapinoe, meanwhile, points to the knowhow and versatility of the Dutch.

"A fantastic team front to back, able to play multiple ways. They're European champions. It takes a certain amount of discipline and mental strength," she said. "This team is tested against the best competition. They have that idea of what it takes to win a championship more than the other teams we've faced."