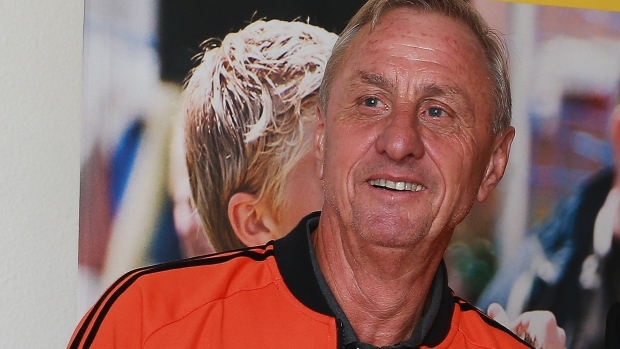 Johan Cruyff, a soccer star who brought a smile to the face of anyone who watched him play, died Thursday, aged 68.

Family spokeswoman Carole Thate told The Associated Press that Cruyff died in Barcelona after a five-month battle with lung cancer.

Ranked alongside such global stars as Pele, Diego Maradona, Franz Beckenbauer and Lionel Messi, Cruyff was one of the best footballers of all time.

He learned his trade at Ajax Amsterdam before joining the great Barcelona, and played 48 times for the Netherlands, scoring 33 goals.

Cruyff was more famous for his silky skills than soccer statistics and was the embodiment of "Total Football," a soccer philosophy that embraced high speed skills and the ability to turn defence into attack in a flash.

"Another legend has left us today," said Messi, the Argentina and Barcelona forward.

The Netherlands-France friendly on Friday in Amsterdam will be halted in the 14th minute for a minute's silence in honour of Cruyff, who made the No. 14 shirt his own during his glittering career in the Netherlands team.

Obsessed by football to the end and ever the positive thinker, Cruyff said his recovery was going well. "I have the feeling that I am 2-0 up in the first half. The game is not over yet. Still I know that in the end, I will win."

Football lost a revolutionary, who embodiment of the Dutch brand of "Total Football," a man who stood up for the cold commercial rights of players and one who proved positive attacking football was a winning combination in Europe after years of defensive domination.

France great Michel Platini, the former head of European soccer, said, "Johan was my childhood hero, my idol and my friend."

Though a World Cup title eluded him, he was the pivotal figure on the 1974 Netherlands team that electrified the sport with its "Total Football" tactics, with players constantly interchanging roles. The tactics influenced the game worldwide, bringing fresh life to a sport that became stuck in a defensive mindset.

"Football has lost a man who did more to make the beautiful game beautiful than anyone in history," said former England striker Gary Lineker, who played under Cruyff at Barcelona.

Cruyff smoked cigarettes most of his life and finally quit after undergoing an emergency heart bypass operation in 1991. After more heart trouble in 1997, he vowed never to coach again, though he remained an outspoken football critic and analyst.

On the field, Cruyff's wiry frame housed surprising athletic talent, unpredictable bursts of speed and agility and precise ball-control that allowed him to trick opponents, ghosting around them with ease. His genius lay in his instinctive feel for seeing how a move would develop before it actually began.

"Speed and insight are often confused," he said. "When I start running before everybody else, I appear faster." That speed and anticipation also gave him an unmatched grace under duress.

But his influence reached far beyond creating goals, thanks to his qualities as a leader, thinker and speaker. With a brash Amsterdam accent, he put across his views about soccer and everything surrounding the game with irresistible force.

His comments became oft-quoted classics: "Every disadvantage has its advantage."

Cruyff was heavily involved in tactics from the start of his career. Along with Rinus Michels, his coach at Ajax and Barcelona, he helped develop Total Football.

Under the strategy, players pass the ball frequently to seek advantage, and switch positions seamlessly to adjust to the flow of play. Latin American admirers referred to the orange-clad Dutch national team as "The Clockwork Orange."

Cruyff was the personification of a total footballer, playing deep or shallow as the moment required, as deadly from the wings as from his assigned position in the centre. He was among the first to see defenders as part of the attack.

With Cruyff on the field, Ajax won the European Cup for three consecutive years from 1971-73 before he moved to Barcelona midseason in 1973 and led the middle-of-the-table team to its first national title in a decade.

That season was crowned with a 5-0 away win at archrival Real Madrid, so sweet the Catalans still sometimes refer to Cruyff as "El Salvador," the saviour.

The transfer fee paid by Barcelona was a world record and is seen as a milestone in the commercialization of sport. He was also one of the first soccer players to take on corporate sponsorships.

Even if it is common now for major players to enjoy a golden twilight in the United States, Cruyff did so almost 40 years ago, when at 32, he joined the Los Angeles Aztecs.

British sports writer Dave Miller, who once called Cruyff "Pythagorus in boots" for his ability to calculate the geometry of players in motion, wrote that "few have been able to exact, both physically and mentally, such mesmeric control on a match from one penalty area to another."

Many fans who watched Cruyff play as children can still replicate some of his moves, including the "Cruyff turn," a technique he used for passing defenders by faking toward them, then flicking the ball behind his own other leg in the opposite direction and darting after it.

Cruyff's pronouncements on the game skirted the line between profundity and nonsense.

Criticizing overly defensive play, he once said: "Italians can't beat you, though you can lose to them."

Other much quoted lines were: "You can't score if you don't shoot," and "Before I make a mistake, I don't make it."

Cruyff launched a tradition of great forwards coming out of the Netherlands that included Marco Van Basten, Patrick Kluivert, Ruud van Nistelrooy, and Dennis Bergkamp. Yet defenders like national team player Ronald Koeman were just as much inspired by him.

"He meant almost everything to me," Koeman said.

He had a wife Danny, daughters Chantal and Susila, and a son Jordi, who also played soccer professionally.

"He was our most famous Dutchman around the globe," Prime Minister Rutte said.