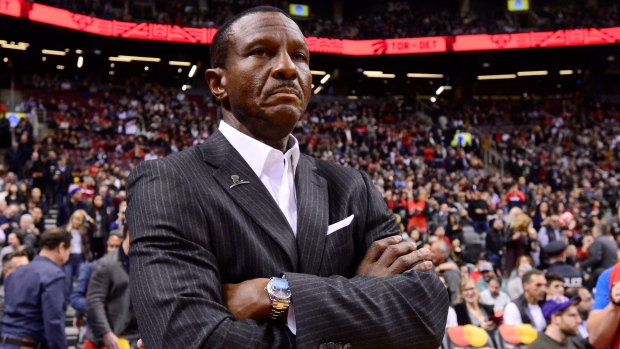 Despite the Toronto Raptors winning their first-ever NBA championship just a season after firing him, former Raptors coach and current Detroit Pistons coach Dwane Casey says he isn't envious of the team.

“I think everybody thought I would be, ‘Woe is me.’ But I looked at it the other way,” Casey said in an article published by The Athletic on Monday. “What it did, it reinforced what I was I doing. And that group took it over the hump and finished it. The foundation, what we were building, how I was building it, was good. Running the same offense, same defense, same philosophy, same things we built there for seven years, so it enthused me. I was happy for the players, for the country and the team. It really energized me, that what we were doing was right. I took that with it, more than jealousy.”

The 62-year-old Casey, who has coached 10 seasons in the NBA, has never won an NBA title. Casey did, however, achieve tremendous success in his seven seasons with the Raptors (2011-2018). He led the team to the playoffs in five of his seven seasons, is the franchise’s leader in regular-season and playoff wins, and was named the NBA's Coach of the Year for his final season with the Raptors.

“It was all positive. There was nobody that I know, family or whatever, that was pissed off that (the Raptors) won the championship. Believe me, I was just pulling for them, as much as every else. Everybody was expecting me to be like,” Casey paused, lowering his head, slouching his shoulders, and curling his lips as if to mope. “No, not at all.”

While Casey did say he was "happy" to see the Raptors win the NBA championship, he did also say that he felt like he never really had the player personnel equipped to win a title.

“I wasn’t there to see it through fruition but you can’t take away the numbers and what we accomplished. Again, it’s not a championship. But I don’t know if we were really ready or built for a championship with that group,” said Casey, the only coach in Raptors franchise history to leave with a winning record (320-238). “They had to add (Marc) Gasol, and Danny Green and Kawhi to that foundation that was there, to go ahead. That’s what I want to do here. That’s why Tom has given me a long term contract to build it here and that’s what we’re on the road to doing.”