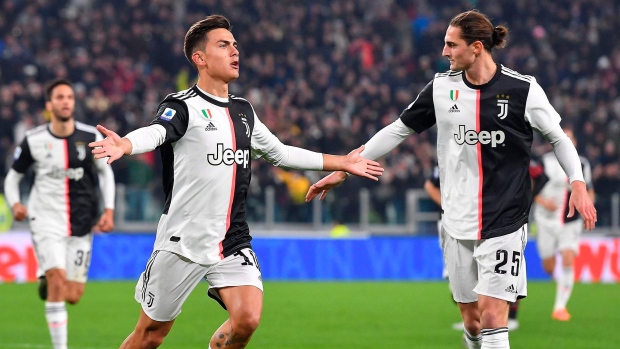 MILAN — Paulo Dybala replaced Cristiano Ronaldo and scored the winner as Juventus beat AC Milan 1-0 Sunday to move back to the top of Serie A.

Milan had the better of the chances but substitute Dybala netted 13 minutes from time to secure victory for the eight-time defending champion.

Ronaldo has struggled with a knee injury recently and was substituted for the second straight match early in the second half. The Portugal international did not look happy and walked straight down the tunnel.

"Ronaldo is not a problem, in fact we have to thank him because he made himself available even though he wasn't in the best physical shape," Juventus coach Maurizio Sarri said. "In the past 20-25 days he has been living with a knee problem after he took a knock in training and that's causing him some problems when he kicks and is affecting him."

Juventus restored its one-point advantage over Inter in the Serie A standings after the Nerazzurri's 2-1 win over Hellas Verona on Saturday.

"Now it seems that the league will be a duel between us and them, but there's still a long way to go," Dybala said.

Milan arrived at Allianz Stadium with just one win in its last four matches but forced Juventus goalkeeper Wojciech Szczesny into several tough saves in the first half.

But Ronaldo's substitution was to pay off when Dybala collected the ball from Gonzalo Higuain, dribbled his way into the area and fired into the bottom left corner.

Cagliari moved into the Champions League slots with an impressive 5-2 win over Fiorentina.

Nainggolan, who joined Cagliari on loan from Inter in the off-season, provided three of the assists before scoring a screamer of a goal himself.

Sardinian club Cagliari has finished in the bottom half of the table in each of the three seasons since it was promoted in 2016.

Roma and Atalanta both slipped two points off the Champions League places.

Roma lost 2-0 at Parma while Atalanta was held 0-0 at Sampdoria, just days after picking up its first-ever Champions League point with a 1-1 draw against Manchester City.

Atalanta was forced to play the final 16 minutes of its match with 10 men after midfielder Ruslan Malinovskyi was sent off with a second yellow card.