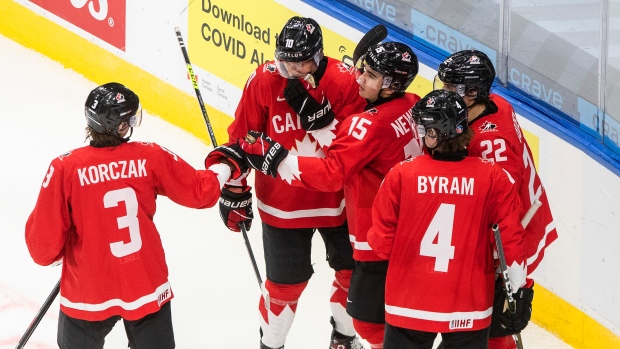 Despite a lopsided result, Team Canada head coach Andre Tourigny was not interested in making Canada's trouncing over Team Germany to be anything more than what it was.

"We played a team who had 13 or 14 players and got hit by Covid and played two games in 24 hours without having time to practice before," Tourigny said. "We can't get too excited about that one."

Dawson Mercer, Peyton Krebs, Alex Newhook and Philip Tomasino also scored two goals each for Canada (1-0-0-0) who made a statement in their Group 'A' contest.

Devon Levi was solid in goal despite being barely tested. He made nine saves in two periods of work. Dylan Garand played in goal for Canada for the final 20 minutes in relief.

Canada improved to 15-0 all-time against Germany at the IIHF World Junior Hockey tournament and were two goals shy of equaling the record for most goals scored in a single game at the tournament.

With goal differential factoring as a potential tiebreaker, Canada didn't hold back in their offensive attack, yet tried to continue to play to their identity without showing up their opponent.

"We're up a lot, but we're not going to change the way we play," Cozens said. "We have to pretend like it's a close game and keep those good habits going."

Arno Tiefensee started in goal for Germany (0-0-0-2) and struggled from the start. A combination of poor play and unforced errors resulted in three goals allowed on the first five shots faced. He allowed four goals on 11 total shots before being pulled in favour of goaltender Jonas Gahr, who struggled equally. He allowed 12 goals on 33 shots faced.

Germany played their second consecutive game with just 14 skaters. The Germans were unable to practice after several rounds of quarantine resulting from multiple positive COVID-19 cases. They fell to Finland 5-3 in their opening match with the same amount of players on Friday.

"This happens when you're not mentally and physically able to play on this kind of level with this intensity and speed" Germany head coach Tobias Abstreiter said following the game. "Yeah, this the result, we had no battle or anything against Canada's strong game."

Canadian defenceman Kaiden Guhle opened the scoring for Canada by beating Tiefensee on the short side at 1:54 of the opening period. Quinton Byfield and Jakob Pelletier picked up assists.

With Germany on the power play, Tiefensee mishandled the puck behind the net. Mercer striped Tiefensee of the puck and put it into an empty net to give Canada a 2-0 lead at 7:27 of the first period.

After a check to the head of Germany's Jan-Luca Schumacher, Canada's Braden Schnieder received a major penalty and a game misconduct. The hit is sure to draw a review from IIHF issues and he could be subject to further discipline. Schumacher stayed in the game.

Germany responded on the power-play as John Peterka scored at 13:12. Florian Elias and Tim Stuetzle picked up assists.

Tomasino quickly responded for Canada and restored their two-goal lead at 14:20.

With timing winding down in the opening frame, Krebs scored the first of two goals and Canada's fourth goal of the game. After some confusion with the television footage showing the puck outside of the net with 0.0 on the clock, the officials ruled it was a good goal.

Ghar started in goal for Germany to start the second period.

Mercer picked up his second goal of the game while waiting for a feed in the slot. He beat Gahr for a 5-1 lead.

The change in goaltenders for Germany didn't result in better puck handling. Ghar lost control behind the net. Mercer was there once again to strip the puck. This time he fed it to Nick Suzuki for a 6-1 lead.

Tomasino was the lastest to join the parade of Canadians with two goals as he sent a knucklepuck that found the back of the net at 13:01.

Team Canada scored their 10th goal when Cozens cashed in on a breakaway, his first goal of the game at 18:14.

Canada will take on Slovakia in their second game of the tournament on Sunday.

Germany could field a roster closer to full strength in their next game provided quarantine players yield negative test results. They get a day off before taking on Slovakia on Monday.