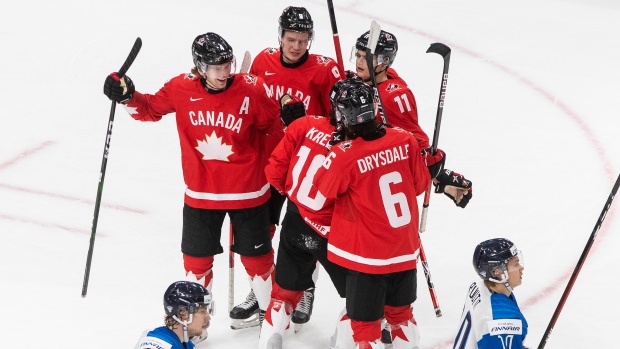 After four preliminary games, Team Canada appears to have found their identity.

"They're a real strong opponent but we played our best game so far," Dylan Cozens said following Team Canada's 4-1 win  over Team Finland on Thursday night. "We reloaded hard on pucks and they had a tough time getting out of their zone, that was all because of our track."

Cozens scored twice as Canada dominated the Finns to close out Group 'A' action at the World Juniors in Edmonton.

Apart from a push back in the third period, Finland had no answer for a dominant forechecking Canadian squad for much of the night.

"At the start of the game we weren't ready at all. Team Canada was so good," Finnish head coach Antti Pennanen said. "They played with high speed that it was a high-demanding game for us."

Devon Levi made 18 saves for Canada (4-0-0-0), who will face the Czech Republic in quarterfinal action at the World Juniors on Saturday.

Dylan Holloway and Peyton Krebs also had goals for Canada.

Kari Piiroinen made 36 saves for Finland.

Cozens opened the scoring with his fifth goal of the tournament. Canada was on a 3-on-2 while on the attack. Cozens elected to keep it and beat Piiroinen for a 1-0 lead at 3:49 of the first period.

Canada has scored in the opening five minutes in all four preliminary games in the tournament.

Finland was slow to establish any form of attack. Their first shot on goal came at 9:48 of the opening frame.

Canada outshot Finland 17-1 after 20 minutes, but only led 1-0 after the first period. The Canadians also failed to capitalize on a pair of power-play opportunities.

"I'm not going to lie, I would have loved to be up by a few goals," Canada head coach Andre Tourigny said of the period. "But up 1-0 the only thing on my mind was we need to keep playing that way. Don't change a thing."

The second period was similar to that of the first.

Holloway made it 2-0 Canada when he deflected a shot from Jakob Pelletier. Braden Schneider picked up the second assist at 6:54.

Krebs gave Canada a 3-0 lead when he picked up the rebound from Bowen Byram's point shot. Connor Zary picked up the second assist at 12:58.

Canada continued to outpace Finland as they outshot them 18-6 after 40 minutes.

Finland got its first power play of the game in the third period, and they cashed in on the opportunity when Lambert's shot went off Canada's Thomas Harley and beat Levi for a goal. Topi Niemela and Juuso Parssinen picked up assists at 5:05.

Finland continued to press as Canada shifted to a defensive mode to hold onto the lead.

Cozens scored his second goal of the game with an empty-netter at 18:43 to ice it for Canada.

Dubbed as the 'Workhorse from Whitehorse', Cozens has stood out as Canada's most consistent player at the World Juniors. His speed and two-way ability has helped carry Canada's offence. With its captain, Kirby Dach, unavailable to the team after suffering a broken wrist in pre-tournament play against Team Russia, Cozens has become a leader on the scoresheet and in the dressing room.

"He competes and he wants it, he wants to be a difference maker," Tourigny said of Cozens. "Now he has the maturity to stay with it."

Apart from some issues on the power-play (0-for-5), Canada put on a dominant performance that should put the remaining teams on notice. Despite an impressive outing against the Finns, there doesn't appear to be any overconfidence from Canada heading into the knockout stages.

"The Czech (Republic) did us a favour by beating the Russians," Tourigny said, "They showed us how good they can be."

NOTES: Canada forward Alex Newhook left the game at the start of the second period. Newhook appeared to favour his shoulder after a collision with Finnish defenceman Eemil Viro in the first period. Newhook returned to the bench for the start of the second period, but went back to the dressing room and did not return. An update on Newhook's status is expected on Friday, according to Tourigny... With Schneider's assist, every skater on Canada's roster has recorded at least one point.