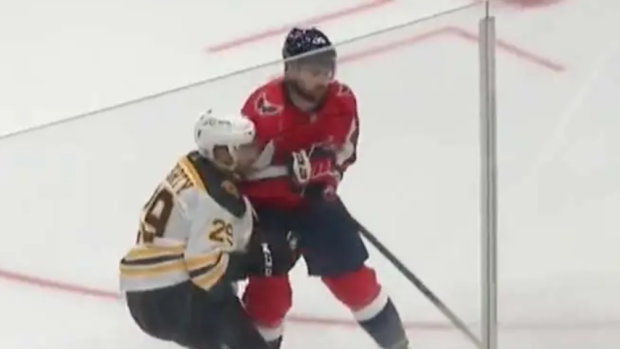 Dylan McIlrath was suspended for two preseason and regular season games for an illegal check to the head the NHL's Department of Player Safety announced on Monday.

Washington’s Dylan McIlrath has been suspended for two preseason games and two regular season games for an Illegal Check to the Head on Boston’s Steven Fogarty. https://t.co/8IMf9ELr3F

In the opening minute of the third period of the Cap's 3-2 loss, McIlrath caught Fogarty with a high hit. He was issued a five-minute major and a game misconduct. Fogarty did not return to the game for the Bruins.

McIlrath, 29, signed as a free agent with the Caps in the summer after spending last season with the Detroit Red Wings' American Hockey League affiliate Grand Rapids Griffins. He has appeared in 66 NHL games over seven seasons with the New York Rangers, Florida Panthers and Red Wings.