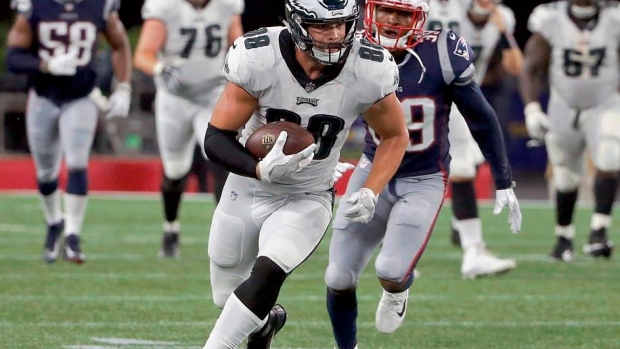 PHILADELPHIA — A picture on a wall inside the Philadelphia Eagles' practice facility shows players holding the Vince Lombardi Trophy with the words "The New Norm" written across the middle.

Coach Doug Pederson coined the phrase after the team beat the New England Patriots to win its first Super Bowl.

The Eagles finally got a taste of championship success and they want more. Only eight teams in NFL history have repeated as Super Bowl champs, none since the Patriots did it after the 2004 season.

It's a tough task, but the Eagles are determined to build a dynasty. They won't be underdogs anymore as they were throughout last year's playoffs. Teams are coming for them and they believe they'll be ready for the challenge.

"It's a great opportunity for us this season," Pederson said. "Great motivating factor for us to sort of rip off the dog masks and no longer be the underdog, but now be the hunted. Have the target on our back."

"The biggest thing is the culture we've created, the team-first mentality, a bunch of unselfish players and the camaraderie we've built," Wentz said. "I don't see why the sky can't be the limit for us going forward again. We have high expectations, the city has high expectations and we love that."

Some things to know about the Eagles, who open the season Sept. 6 against Atlanta:

INSURANCE POLICY: The Eagles are in a unique position with a backup quarterback who was the Super Bowl MVP. Nick Foles will be under centre until doctors clear Wentz to return following surgery to repair a torn ACL and LCL last December. Foles will then return to the sideline without complaining. Foles has no ego, understands his role and is close with Wentz. He didn't demand a trade to go start somewhere else, loves playing for the Eagles and enjoys the city. It's an ideal scenario. Foles played poorly in the preseason — minus several starters around him — but he gets a pass after sensational playoff performances.

MORE WEAPONS: Rookie tight end Dallas Goedert, a second-round pick, was impressive in the preseason and joins Pro Bowl tight end Zach Ertz to form matchup nightmares for opposing defences, especially inside the red zone. Versatile running back Darren Sproles returns after missing most of last season, giving the offence another threat coming out of the backfield.

THE UNDERDOGS: An offensive line that features two All-Pros — right tackle Lane Johnson and centre Jason Kelce — and Pro Bowl right guard Brandon Brooks along with left guard Stefen Wisniewski may have been the best in the league last season and now gets Peters back to protect the quarterback's blind side. Halapoulivaati Vaitai, who was shaky in the preseason, has plenty of experience after filling in for Johnson in 2016 and Peters in 2017.

Starting defensive tackle Tim Jernigan is coming off back surgery and it's uncertain when he'll return plus Vinny Curry and Beau Allen moved on.

But Bennett, Ngata and the emergence of second-year pro Derek Barnett should help this unit stay dominant. Fletcher Cox is one of the best interior linemen in the NFL. End Brandon Graham played at a high level and veteran Chris Long showed he had plenty left in the tank.

COVER GUYS: Cornerback is another strength for the defence led by starters Ronald Darby and Jalen Mills. Sidney Jones, a 2017 second-round pick who missed nearly the entire season following surgery on his Achilles before the draft, and rookie Avonte Maddox had a strong battle for the nickel spot and provide plenty of depth.

COACHING CHANGES: Offensive co-ordinator Frank Reich left to become the head coach in Indianapolis and quarterbacks coach John DeFilippo became the offensive co-ordinator in Minnesota. Mike Groh replaced Reich and Press Taylor took DeFilippo's spot. Both coaches already were part of the team's staff and have familiarity with the system and the players.