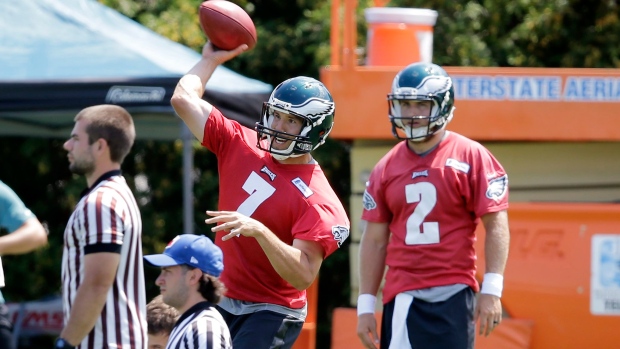 PHILADELPHIA - Sam Bradford was full-go on the first day of training camp.

Bradford took snaps, fired passes and participated in all the quarterback drills with the Philadelphia Eagles on Sunday. He didn't even wear a clunky knee brace on his twice-surgically repaired left knee.

"It's a big step," Bradford said. "It's been almost a year since I've been on the field full speed. It was a really big first step and first day. Each day I'm out here I'm going to get more comfortable."

Bradford has no limitations and even joked he may start scrambling.

"You guys might even see me pull one and run it up the middle," he said.

The Eagles traded Nick Foles and two draft picks to the St. Louis Rams for Bradford and a draft pick in a blockbuster deal in March. Bradford hasn't played since 2013. He missed the final nine games that season after tearing his left ACL and he tore it again in the preseason last year.

But the Eagles are counting on the former No. 1 overall pick and 2008 Heisman winner to lead an offence that's thrived since coach Chip Kelly arrived in 2013. Bradford is one of several new faces, joining All-Pro running back DeMarco Murray and rookie wide receiver Nelson Agholor.

Foles, running back LeSean McCoy and wide receivers Jeremy Maclin and DeSean Jackson each had career years and went to the Pro Bowl playing in Kelly's up-tempo system. Yet, each player is gone.

Bradford was 18-30-1 as a starter for the Rams. He has 59 TD passes, 38 interceptions and a 79.3 passer rating in a five-year career. Bradford, who will earn $12.9 million this season, is part of a high-profile quarterback group that includes Mark Sanchez, Tim Tebow and Matt Barkley.

Sanchez led the Eagles to a 5-4 record after Foles was injured. Tebow is competing with Barkley for the No. 3 job after sitting out two seasons.

"Just to be a part of it felt good, adjusting to the speed of the game," Bradford said.

Kelly said he was surprised and bothered by Boykin's comments.

"When he left here last night, he shook my hand and gave me a hug," Kelly said. "I like Brandon. I just don't know. I really don't know."

Boykin played three seasons for the Eagles and had six interceptions in 2013. He played nickel cornerback in the secondary and was hoping to get a chance to start. Kelly and defensive coaches prefer taller cornerbacks on the outside. Boykin is listed at 5 feet 10.

"When talking to him last night, I think he was stunned," Kelly said. "He was disappointed. I think he really liked it here. Very close with his teammates."

Tra Thomas, a former coaching assistant, and running back LeSean McCoy also made racial assertions against Kelly on their way out of Philadelphia.

"Talk to DeMeco (Ryans), talk to the other guys here. I think those are the guys you should talk to," Kelly said.

Ryans said he has no problem with Kelly.

"That's one man's opinion," Ryans said of Boykin. "Me and a lot of other guys don't feel the same way."

"It's not that he doesn't understand the culture, it's that no one man is bigger than the team," Jenkins said. "Chip likes uniformity and I don't have a problem with that."

The Eagles got a conditional fifth-round pick in 2016 from Pittsburgh for Boykin. Kelly said it becomes a fourth-round pick if Boykin plays 60 per cent of the snaps.