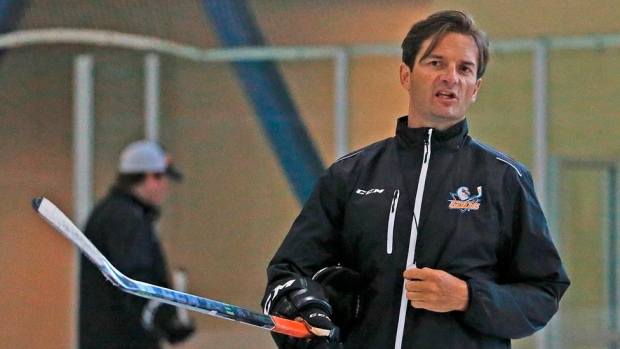 Dallas Eakins answers the phone as he's walking from the arena to his team's hotel in suburban Chicago.

Ominous storm clouds looming above, the head coach of the San Diego Gulls offers a warning.

"Either I'll make it back without getting wet," Eakins, 52, says on the line from Rosemont, Ill. "Or I'll be absolutely soaked.

He eventually makes it to shelter largely unscathed — much the same way he's manoeuvred through a hockey life that's been anything but a straight line.

Eakins suited up for 120 games with seven NHL organizations as a defenceman during a 16-year professional career, but spent countless hours riding buses in the minors with teams like the Baltimore Skipjacks, Moncton Hawks, Cincinnati Cyclones and Worcester IceCats.

Once he was done battling in the corners and in front of the net in 2004, Eakins moved behind the bench.

He rose to become one of the game's hottest head coaching commodities, and nine years later was plucked from the American Hockey League's Toronto Marlies to lead the Edmonton Oilers.

Transitioning to the NHL should have been a career highlight. It instead turned into a disaster.

Eakins was fired after just 113 games — a trying 18-month span that ended with a record of 36-63-14 and plenty of self reflection.

"I made some mistakes in Edmonton by really going too fast on a few things ... it wasn't a very smart move," Eakins said during that recent phone interview. "I know I was ready. I just went about trying to change a culture. The way I went about it, I damaged some relationships that took almost a year to get back, but even when it happened, it was too late. I was ready, but I made a mistake culturally.

"And the sad thing is, I knew better."

Eakins dusted himself off, got back behind the bench in the AHL with the Gulls — the Anaheim Ducks' affiliate — and has found more of the success that got him to the NHL.

San Diego is 154-95-23 over the last four seasons, has made the second round twice and is now tied 1-1 in the Western Conference final against the Chicago Wolves. Game 3 of the best-of-seven series goes Wednesday in Southern California.

Looking back, Eakins is conflicted when it comes to his time in Edmonton.

On one hand, it was a brutal, demoralizing experience.

And on the other, he's thankful for the challenges he faced.

"I don't wish it on anyone," said Eakins, who was born in Florida and raised in Peterborough, Ont. "But at the same time, I wish it for everybody. It's like, 'That's hard, man.' Those Canadian markets ... I'm not going to lie. All eyes are on you. And as hard as it is, you relish it. There's nothing to fear, you just go right into it.

"I hope my kids have to go through that kind of adversity someday because it's going to make them extremely strong. It's not a failure. It's just a lesson. That's all it is."

With the Gulls, Eakins has rediscovered his groove.

"It's hard not to follow him," San Diego captain Jaycob Megna said. "He truly believes and buys into the stuff he wants you to buy into. It makes it a lot easier when he sets the example and all you've got to do is fall in line."

Like every player in the AHL, Eakins wants to be in the NHL.

For a brief moment in February, he thought it was going to happen without much notice.

The Ducks had just fired head coach Randy Carlyle. Eakins got the news via email.

"My thought process was quick," he recalled. "I've known Randy Carlyle since I was 22 years old and he's a dear friend of mine. I know what he had been going through up there. Getting fired, my heart was heavy for him.

"Your next thought right away is, 'Holy man, is this on my plate now?' Then as I read through the email it said (Anaheim general manager Bob Murray) was going behind the bench, which I thought was a brilliant move on his part to really get in there and see what's going on and get a feel for the room and have a really close look at his players."

With his status in San Diego confirmed for the rest of this season at least, Eakins went back to work with a roster sprinkled with talented youngsters in an effort to make the playoffs.

The Gulls got in, of course, and have already made an impressive run.

"It's been an interesting journey," Eakins said. "We've had to take some lumps along the way.

"But like anything in life, the things that come hard are usually very productive in the end."

Just like, on some level, his time in Edmonton.