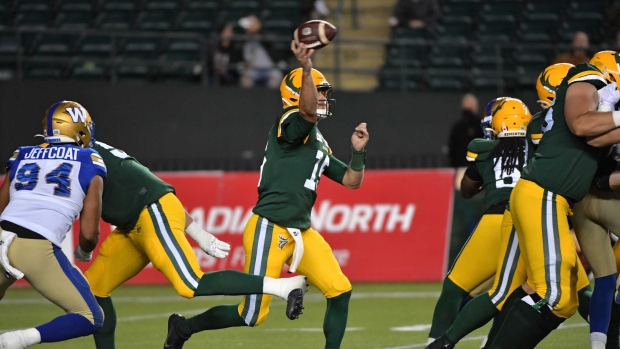 Edmonton Elks head coach Jamie Elizondo said that he will go with quarterbacks Taylor Cornelius and Dakota Prukop over Trevor Harris for Friday's game against the Winnipeg Blue Bombers, according to CHED's Dave Campbell. There is no injury to Harris.

#Elks HC Jamie Elizondo says after practice he will go with Taylor Cornelius and Dakota Prukop over Trevor Harris for Friday’s game against the Bombers. Cornelius took the majority of first team reps. There is no injury to Harris.#CFL

Elizondo said that the decision to move away from Harris was a tough one, but necessary as the Elks were not getting enough out of the QB position. He continued saying that, although the struggles were not all on Harris, Elizondo feels the Elks can attack differently with Cornelius and Prukop under centre.

In six games this season Harris has completed 135-of-192 passes for 1,568 yards, six touchdowns and five interceptions. The Elks sit last in the West Division with a 2-6 record.