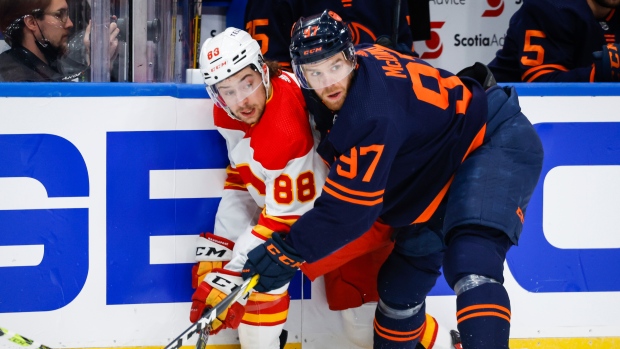 Evander Kane scored three goals in six minutes as the Edmonton Oilers dominated the second and lead the Calgary Flames 4-0 heading to the third.

Zach Hyman got the Oilers on the board less than a minute into the period, taking a feed from Leon Draisaitl and putting it past Jacob Markstrom on the far side.

Kane extended the Oilers’ on another rush at 6:58 of the period, taking a pass from Draisaitl in front of the net and making a nice move to his backhand to slip it past a sprawling Markstrom. It was Kane’s third goal in his past five games.

Kane added his second of the period less than one minute later thanks to another highlight reel play from Connor McDavid. The Oilers’ captain gained the zone by putting the puck between his legs and slipped the puck across the front of the net to the waiting Kane, who put it home to make it 3-0.

Kane completed the natural hat trick at 7:02 of the period. After serving a penalty, Kane jumped out of the box and joined McDavid on another rush and once again put away took a slick feed from the captain to give the Oilers a 4-0 lead. It was Kane’s 10th goal and second hat trick of the playoffs.