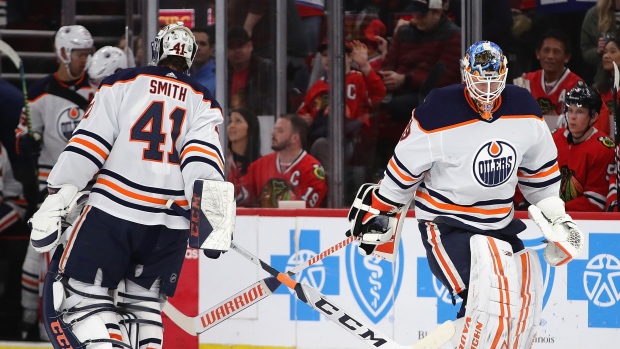 Heading into the upcoming season, the Edmonton Oilers front office knows the pressure is on to improve. An otherwise strong 2019-20 was tainted by an ugly play-in round loss against the Chicago Blackhawks, and the fan base is eager to see a better lineup surrounding superstars Connor McDavid and Leon Draisaitl.

The Oilers’ issues last season, broadly speaking, can be bracketed into three categories: goaltending, competency and production of depth players, and defensive results from their stars against tougher competition.

The defensive performance question is one that head coach Dave Tippett will have to work through. You aren’t going to throttle down the playing styles or tempo of a McDavid or Draisaitl line, and that issue is a distant third compared to the other two challenges. But those lines still concede too many goals against and it does adversely affect their net impact. More on this in a bit.

The other two issues fall in the hands of the front office, but Edmonton’s cap situation did not leave them in a position to solve both. Not this off-season anyway – one embroiled in an economic disaster that forced zero cap growth for next season.

The front office opted to punt on the goaltending question in order to address the depth problem. To the extent that these goaltending problems also contribute to the top line’s defensive numbers (and they surely do), it may be fair to say the Oilers punted on two of their three concerns.

It remains to be seen if doubling down on a Mikko Koskinen/Mike Smith tandem is a smart bet. Koskinen was a bright spot early last season and the duo was sensational on the penalty kill all year long, but the lead indicator of future performance – the tandem’s ability to stop shots at even strength – was not encouraging, mostly because Smith had a really tough season.

If we look at goals saved above average (relative to league average save percentage) and goals saved relative to expectations (adjustments for shot quality faced), the Oilers goaltending duo does not come off looking great: 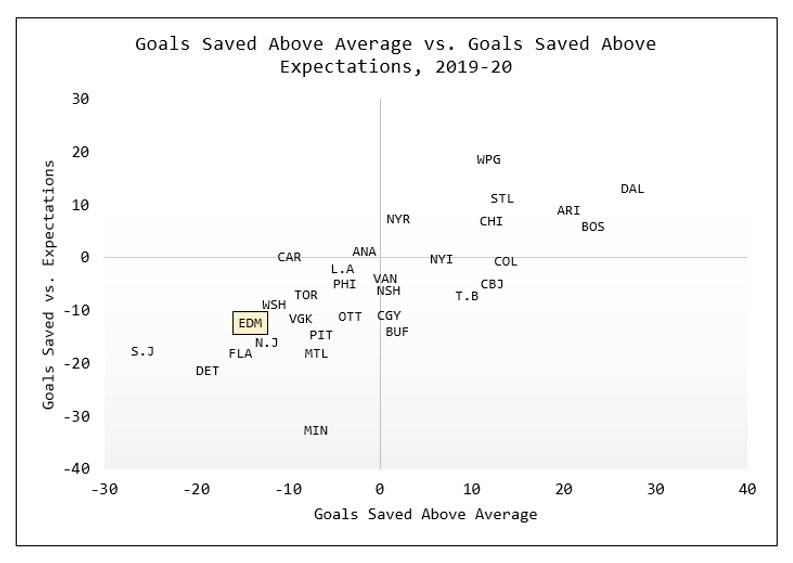 That’s a sizable gamble by the Oilers. You’ll notice that other quality teams that struggled with goaltending – the Vegas Golden Knights, Washington Capitals and Pittsburgh Penguins immediately stand out – all made major changes in the crease. One of those teams, unfortunately, is a team the Oilers are looking up at in the Pacific Division.

But there is no doubt that the Oilers did improve the talent in the skater ranks this off-season, especially at the forward position.

First, let’s spell out just how much of a problem this was for the Oilers last season. For starters: the fourth line (on average) had the league’s 28th best goal differential. (Lines determined by average usage for qualified skaters) 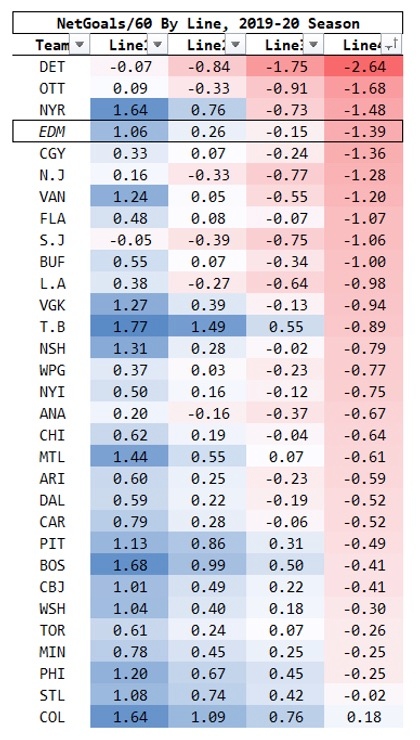 The Oilers were not a good even-strength team last year – the majority of players in their top six were actually outscored at evens, and the likes of Draisaitl (+3) and McDavid (+2) barely kept their head above water, despite relentless scoring.

The goals against issues that the team faced at the top of the lineup were there just the same at the bottom of the lineup, minus the Herculean offensive production. So Edmonton once again chewed through a season where depth players were routinely getting outscored. (The difference maker last season, and why they were a bona fide playoff team in the end, was a lethal power play and an equally capable penalty kill. Neither of those should be discounted in the slightest.)

To address those concerns, the Oilers worked to bring in more bottom-six skill. Forwards Kyle Turris (an upgrade over the defensively deployed Riley Sheahan) and Jesse Puljujarvi certainly top that list, and Tyler Ennis and Kailer Yamamoto are slated to return for full-time work in 2020-21. That’s four NHL capable forwards injected into the lineup who either played sparingly or not at all for the Oilers last season.

And think of the names they are displacing: the aforementioned Sheahan, Patrick Russell and Sam Gagner are out of the picture, with other players (Alex Chiasson as one example) likely to see a downturn in usage.

What remains to be seen is if addressing the skaters in lieu of the goaltenders, at least for this season, was the right play by the front office. If the goaltending favourably regresses, the Oilers could look like world beaters next season. But if the goaltending issues persist, it’s likely that Edmonton will be bogged down the same way they were this season, trading goals more frequently than they would like and ceding ground to other teams in the standings.