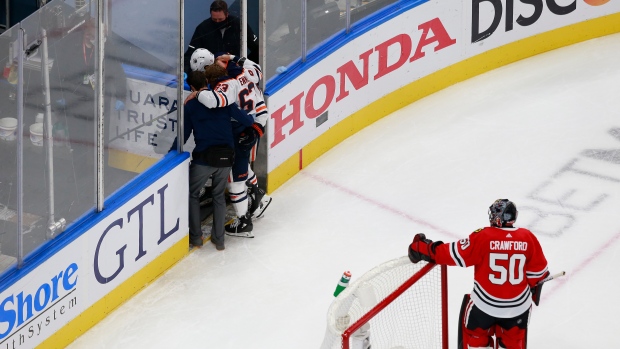 The Edmonton Oilers will be without forward Tyler Ennis for their must-win Game 4 against the Chicago Blackhawks on Friday.

Oilers head coach Dave Tippett said that Ennis, who left Wednesday's Game 3 loss with an apparent leg injury, was unfit to practice Thursday and is out indefinitely.

Tippett also said that defenceman Adam Larsson, who missed Game 3 with an undisclosed ailment, would be reassessed following the team's skate on Thursday.

Coach Tipp announces that Tyler Ennis is out indefinitely after sustaining an injury last night. He adds that Adam Larsson will be reassessed following today’s #Oilers skate.

Ennis was hit into the boards by Chicago's Kirby Dach late in the second period of the Oilers' eventual 4-3 loss. Head coach Dave Tippett said the team expects to know more about Ennis' status going forward on Thursday.

The 30-year-old needed to be helped off the ice and was reluctant to put any weight on his right leg.

Prior to his departure, Ennis had one assist on a Leon Draisaitl goal in 6:12 of ice time.