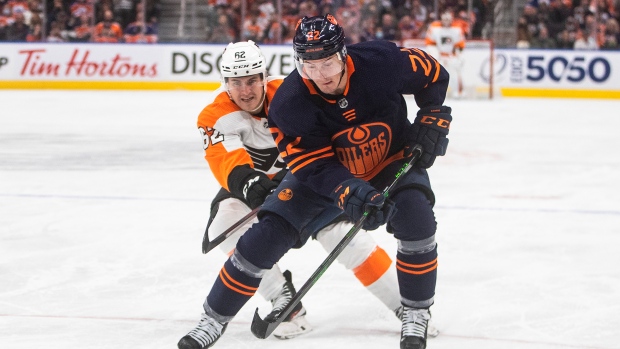 The Edmonton Oilers suffered their first loss of the season Wednesday, falling 5-3 to the Philadelphia Flyers.

The loss marked just second time in six games the Oilers have been held under five goals as they record fell to 5-1. The Oilers, who outshot the Flyers 37-34, took the loss in stride postgame.

"There are probably games that we played that we didn't deserve to win, or the goaltending was spectacular," defenceman Tyson Barrie said. "Tonight, I thought we played well. There are a couple we would have liked to have back.

"It would have been nice to go 6-0 to start the year, but you are not going to win them all."

The Oilers dominated the play in much of the second period, outshooting the Flyers 12-6, but could only find the back of the net once as Zach Hyman scored his sixth of the season to tie the game at 3-3 less than a minute into the frame.

"I thought we worked hard and kept pushing at the end but, unfortunately, couldn't get it."

The Oilers will return to the ice Saturday against the Vancouver Canucks for a rematch of the team's season opener, which the Oilers won 3-2 in a shootout.