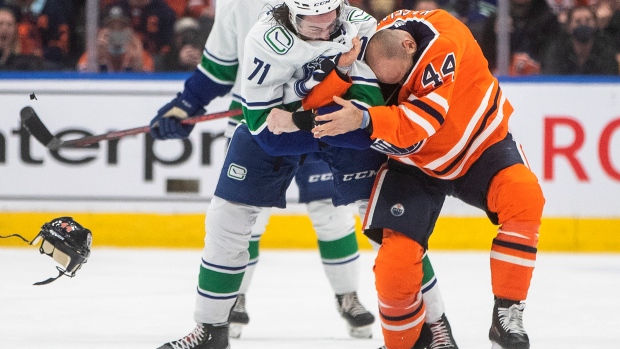 Edmonton Oilers forward Zack Kassian will be in concussion protocol for the next few days following a head injury he sustained in Thursday's preseason game, according to head coach Dave Tippett. The bump on Kassian's head has gone down and the 30-year-old is reportedly in good spirits. Tippet feels Kassian and the Oilers 'dodged a bullet' considering how serious the injury could have been.

Tippett says Kassian came in today, was in good spirits. Bump on the head has gone down and that he’s feeling ok, but will be in concussion protocol for the next few days. Tippett feels they dodged a Bullet with how serious it could have been.

Kassian, 30, was helped off the ice after appearing to hit his head hard on the playing surface after a fight with Zack MacEwen of the Vancouver Canucks in the third period of Thursday night’s matchup.

Kassian is entering his seventh season with the Oilers, having registered to goals and three assists in 27 games last season.