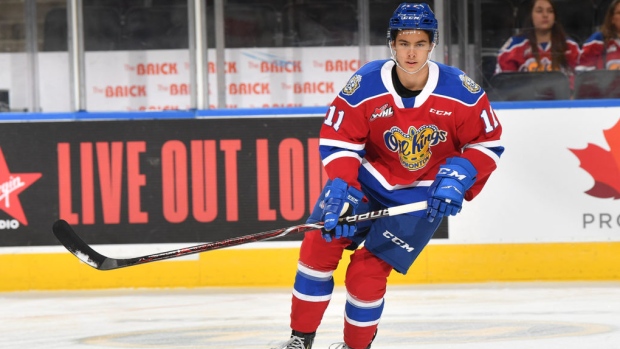 Dylan Guenther refused to let the waiting get to him. The Edmonton Oil Kings right winger used the challenging times in this pandemic season to challenge himself to stay focused on improving.

"A different year and I really learned to expect the unexpected and just be ready to go whenever," Guenther said. "We were off the ice for a bit with all the quarantining, and then not knowing when we were going to be able to play, and that really does build up your mental strength and helps you get stronger as a person and makes you be on your toes."

When Guenther finally did get a chance to play in February, he was ready and it showed. He piled up 12 goals and 12 assists in 12 Western Hockey League games. The Edmonton native also produced four goals and seven points in seven games at the IIHF Under-18 World Championship in Texas, helping Team Canada win gold.

Dylan Guenther picks up his second goal of the period to make it 6-2 Canada! #U18Worlds pic.twitter.com/Kx2dd9W5qO

"A big thing for me and big focus for me was getting stronger and, with the extended off-season, I was able to do that and feel a lot stronger and faster," the 18-year-old explained.

Guenther tied for second on TSN Hockey Insider Bob McKenzie's mid-season ranking of top prospects, which is based on a sampling of 10 scouts.

Guenther spoke to TSN about his NHL role models and how he turned his shot into such a great weapon.

You told TSN's James Duthie during a recent interview that your hockey IQ is the best part of your game. How did that develop?

"Growing up, I wasn't really the best skater and knowing where the play is going to go helped with that. My hockey sense made up for my skating ability, which is something that's grown in time. I've gotten to be a much better skater in these past three seasons but, at a young age, being able to read a play and see where your teammates are ahead of the time really helped me."

#NHLDraft Prospect Dylan Guenther talks to @tsnjamesduthie about what he brings to the ice as a player and why his hockey IQ as his biggest asset: https://t.co/ygjShZNrLA#TSNHockey | #DraftCentre pic.twitter.com/w25OaSL6wG

How did you improve your skating?

"Just through strength, time and power skating. I really did take a lot of lessons and got a lot stronger these past three years especially. Strength really helps skating just with explosiveness and that’s something I always highlight in my off-season training."

You were named the WHL Central Division MVP and also the most sportsmanlike player. What do you think that says about your game?

"It shows I play an honest game and I respect my teammates and the players I play against. I play hard in between the whistles and I'm not diving into their game plan, which is to get me off my game and [make me] take penalties. I think mental strength is something that helped me with that and that's a pretty cool award to win."

If hockey sense is the best part of your game, what's the second best part?

"I'd say probably my shooting. My shot is something I've worked on for countless hours in my basement. Growing up, I had a pretty good set up down there. I've worked really hard down in my basement for countless years and that's really translated to my on-ice play. And that ties into hockey sense, because my vision allows me to get into the open ice and create time and space to allow me to get my shot off."

"There's a net down there and we kind of built some other equipment that I can stickhandle through and shoot around just to work on changing the angle and maybe getting shots off quick and in uncomfortable situations."

In an interview with Gino Reda for Junior Hockey Magazine back in March, you mentioned that Claude Giroux and Jeff Carter are your NHL role models, but is there a favourite shooter in the NHL that you like to watch?

"That has to be Auston Matthews. I got to watch him so much this year because of the North Division, but also ever since he entered the league. He's a great goal scorer, obviously, as we all know, and I'm just watching his tendencies. I go over video with our video coach and we watch players like him and how he's able to change the angle of the shot and get shots off quick and it's just incredible."

A lot of players try and change the angle, why do you think Matthews is so successful? It almost seems like goalies are guessing with him.

"It's obviously something that he's worked on a ton, because you feel like he can go [multiple] ways. I agree, the goalies are kind of guessing and it freezes them at that point. And with how strong and powerful he is, he's able to pick his spot."

What's the key to developing your shot?

"Just being versatile with it. When I'm on the ice, I'm always trying to develop new tendencies and ways that I can interpret [top player] tendencies into my game. In my basement, I'll also do that. And watching film is where it starts, because you can learn what they're doing to have success."

Practising against teammate Sebastian Cossa, another top prospect in this year's draft, probably helps. What makes him a good goalie?

"He's a great combination of size, speed and competitiveness. He's always working hard to get better in practice as I am and we have a good, friendly competition that way and it makes both of us better. I want to be shooting against the best goalies possible and he's one of the best in the league, so it's awesome to have him on our team and to be able to compete with him in practice."

What are the most common questions during interviews with NHL teams?

"NHL comparison is a pretty common question and then just knowing your strengths and weaknesses. It's important to be able to identify what you're good at and what you need to improve on."

Who do you consider your NHL comparable?

"I'd say probably Giroux. Although, watching [Mark] Scheifele playing against the Oilers in the playoffs, I really liked his game. He plays a solid, honest, two-way game. He can score goals and make plays, but also stop the other team's best players so I really like the way he plays."

A lot of people were surprised the Jets were able to limit Connor McDavid, Leon Draisaitl and the Oilers. What did you see from Scheifele's game in that series?

"Just how tough he played. His willingness to shut down their top guys, but also score big goals. He scored a big goal to tie the game up [in Game 4] and they ended up taking it to overtime and winning."

You mentioned you have to know your weaknesses as well as your strengths. What's a weakness you're working on?

"Strength is a big one for me. As I get stronger, it's going to continue to develop my whole game. Strength is something I'm really looking to work on. With strength comes [better] skating and skating is something I'm always looking to get better at, because the game keeps evolving and getting faster. You can never be too good of a skater and that's something I always highlight in my off-season."