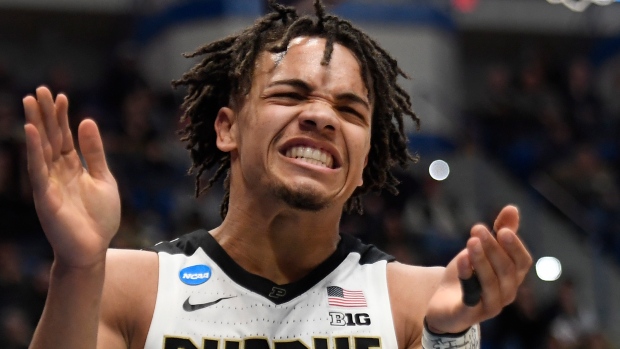 HARTFORD, Conn. -- Carsen Edwards scored 26 points and third-seeded Purdue coasted to a 61-48 victory against Old Dominion on Thursday night in the first round of the NCAA Tournament.

The third-seeded Boilermakers (24-9) will play reigning NCAA champion Villanova, the sixth-seed in the South Region, on Saturday.

Edwards, the Big Ten's leading scorer, has been slumping recently and dealing with a sore back that he insisted was fine on Wednesday. The junior guard had shot 32 per cent in his last 11 games, and was 7 for 33 from 3-point range in his last three games.

The Boilermakers scored the last 11 points of the second half as ODU went stone cold. The Monarchs missed their last 11 shots of the half and went scoreless for 6:17 as Purdue took a control and led 32-19 at the break.

It got no better for the Monarchs in the second half. Matt Haarms, Purdue's 7-foot-3 centre made a 3 from the corner to make it a 17-point game with 16:50 left in the second half. It was Haarms' seventh triple of the season. A minute late, Edwards pulled up for a long 3 that made it 43-23 and prompted ODU coach Jeff Jones to call a timeout.

Old Dominion: The Monarchs reached the NCAA Tournament for the first time since 2011 with coach Jeff Jones battling prostate cancer this season. The season ended with a thud, but it will go down as one of the most memorable in the history of the program.

Purdue: The Boilermakers played most of the game without guard Nojel Eastern, one of the best defensive players in the Big Ten. The sophomore rolled his ankle in pregame warmups and did not start. Eric Hunter Jr. started for the first time this season. Eastern tried to give it a go in the second half and played 10 minutes, but with Purdue mostly in control there was no need to push it.

Hunter, who came in averaging 12 minutes, played 23 and had two points, four rebounds and three assists.

Old Dominion: The Monarchs have to replace their top two scorers (Stith and Caver) and 7-foot-1 centre Elbert Robinson.

Purdue: The Boilermakers are 0-3 against Villanova with their last meeting in November 2016.