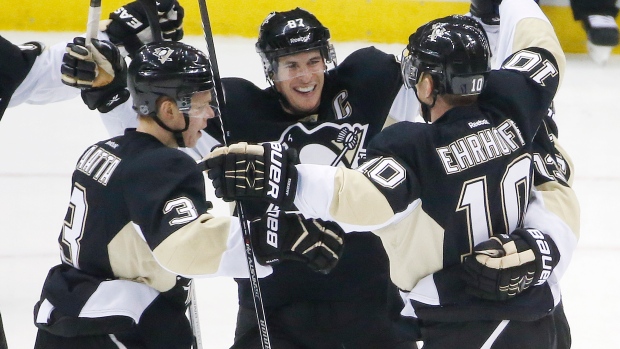 PITTSBURGH, Pa. - Thanks to Sidney Crosby, Christian Ehrhoff had plenty of time and space for his go-ahead goal.

"They missed the coverage on the weak side," the Penguins defenceman said.

"(Crosby) made a great pass. I found a seam. I had a lot of time and picked the corner, and it went right where I wanted to put it."

Ehrhoff's goal with 1:50 left in the third period lifted Pittsburgh to a 3-2 win over reeling Ottawa, which its fifth consecutive game.

The Penguins also got two goals from Evgeni Malkin.

David Legwand and Mika Zibanejad scored for the Senators to forge a 2-2 tie after two periods.

Pittsburgh, which had dominated the first period, began to carry the play as the third period was winding down. Crosby moved the puck up the left side to start the winning play.

"I saw (Ehrhoff) there sneaking," said Crosby, who entered Saturday tied for the NHL lead with 33 points but whose assist on Ehrhoff's goal broke a three-game points-less streak.

"He had a lot of time. He's got a big shot. He showed it there. You give him time like that and he's got a hard one. He put it in a perfect spot, top shelf."

Ehrhoff had a clear look at the net and the luxury of contemplating how he might beat goaltender Craig Anderson.

"That doesn't happen too often, so it was a bit of a surprise, but definitely nice for us," Ehrhoff said. "Usually when you have that much time, you think too much, but I just knew where I wanted to put it, and like I said, this time I put it right where I wanted."

"I thought we created enough opportunities for us to win the game today and we have to continue to do that and we probably could have created more if we would have put the puck to the net in situations when we had people there," Ottawa coach Paul MacLean said."

"We're angry that we lost the game. It was a game certainly that was winnable."

Anderson, who got shaken up on the Penguins' first goal but remained in the game and made 30 saves, said losing winnable games has become a theme.

"We're doing a lot of good things that enable us to win games and we're just not getting the results right now," he said. "It can be frustrating at times, but if we keep focusing on the process and keep focusing on our game, the results will turn around for us and that's what the last few games have been about. We've been there. We've been close. We just need to get over that hump."

The Penguins, who have not lost consecutive regulation games this season, described the game as a bounce-back from a lacklustre performance Thursday in a 3-0 loss to Vancouver.

Malkin, who moved from centre to winger because of injuries, opened the scoring at 4:17 of the first period. Just out of the penalty box after serving a roughing minor, Malkin caught up to the puck in front of the Ottawa bench. He cut in from the left point and tucked the puck behind Anderson's right skate for the only goal of the first period.

"I tried to stop, but I had too much speed," Malkin said.

Later in the first period, Penguins forward Zach Sill was escorted off the ice on a game misconduct after he levelled Ottawa's Kyle Turris in the neutral zone, then fought Senators forward Alex Chiasson.

There was no immediate word on whether Sill might face a disciplinary hearing with the NHL for the high hit. Turris returned to the game shortly after the hit.

"Hockey is hockey. That's not up to me. The referees called it, the league looks at it," MacLean said.

At 1:13 of the second period, Legwand tied it for Ottawa 1-1 during a power play when he deflected a shot from the left point by Erik Karlsson past Pittsburgh goaltender Marc-Andre Fleury.

Zibanejad shrugged off close coverage by the Penguins' Andrew Ebbett and threw the puck between Fleury's past for a 2-1 lead at 8:44.

Malkin tipped a shot by Olli Maatta past Anderson during a Pittsburgh power play to tie it 2-2 at 18:03.

NOTES: Winger Patric Hornqvist, who is still being evaluated for a possible concussion, did not play. The Penguins also were without injured defenceman Kris Letang, injured forward Chris Kunitz, Beau Bennett and Pascal Dupuis, and suspended defenceman Robert Bortuzzo. ... Forward Craig Adams established a Penguins record by playing in his 314th consecutive game.