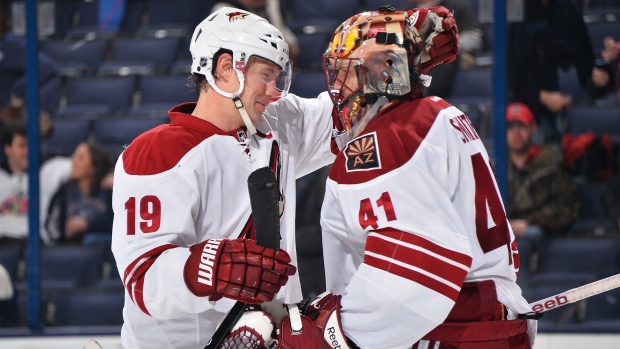 COLUMBUS, Ohio - At the end of a draining, eight-game road trip, the Arizona Coyotes couldn't wait to go home.

They also made sure they got to enjoy the flight.

Oliver Ekman-Larsson and Shane Doan scored power-play goals in the second period, and Mike Smith made 30 saves to lead the Coyotes to a 4-1 victory over the Columbus Blue Jackets on Tuesday night.

"It speaks volumes about our team," said Keith Yandle, who had two assists. "Tonight we were up by two goals and guys were diving, blocking shots, blocking passes. It says a lot about our group."

Lucas Lessio also had a goal, Tobias Rieder added an empty-netter and Antoine Vermette joined Yandle with two assists as the Coyotes completed a 3-3-2 road trip.

"We just wanted to play a solid game and finish off the road trip right," coach Dave Tippett said. "We came out, got a good start. Everybody was involved. Our kids played well again, Smitty was strong in net for us and the power play got us a couple of big goals. And we ended up with a good road trip."

The Coyotes, who came in with the NHL's second-leading power play on the road and seventh-best overall, went 2 for 3 with the man advantage.

The Blue Jackets tied it at 1 in the opening minute of the second period with a man advantage before the Coyotes took control on special teams.

Ekman-Larsson, who led all NHL defencemen with 14 goals coming in, scored his 15th on a wrister from the top of the right circle, with Doan supplying a screen in front of Anton Forsberg, starting his second NHL game in net for the Blue Jackets.

Doan then made it 3-1. Arizona got the puck low and got several cracks at it from in close before Doan controlled the puck and whipped a backhander into the net.

"Our power play came through for us," Doan said. "Our young guys also got a nice goal for us to get us going and to give us a lead."

The Coyotes got on the board first, thanks to some nice play by their fourth line.

Lessio dug the puck off the back wall and passed to B.J. Crombeen, with Forsberg blocking his shot from the left wing. The rebound popped free in the crease, and Brendan Shinnimin was initially credited with the goal. But Lessio got a stick on it from behind the cage to push it over the line.

James Wisniewski scored for Columbus, which has lost three in a row. Forsberg made 25 saves.

"I don't think anybody here is thinking we're going to quit," Wisniewski said of the Blue Jackets, who started the night closer to having the worst record in the NHL than they did to the final playoff spot in the East. "But we're definitely in a big hole. It's a slippery slope. You don't want to get that losing feeling back in this room."

Coach Todd Richards was most displeased with a lethargic start against a road-weary team.

"It's disappointing, especially the way we had played the last three games," he said. "I thought we had been playing hard, thought we'd played fast. We came out tonight and they were the faster team, the more disciplined team. We spent the first 10 minutes in our zone."

NOTES: C Mark Letestu played in his 200th game with the Blue Jackets. ... Lessio has two goals in 11 NHL games since joining the Coyotes on Jan. 8. ... Columbus D Ryan Murray played his first home game since Oct. 31. He had missed 36 games with a knee injury. ... Arizona swept the season series, winning the only other meeting 6-3 on Jan. 3 at home as Martin Hanzal had a goal and three assists. ... Forsberg started to give Curtis McElhinney a break. The Blue Jackets also went with seven defencemen in their lineup.